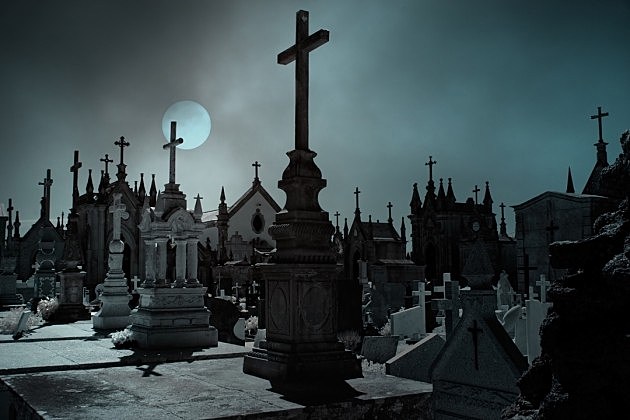 Don Jamieson is a guest contributor to Loudwire. He is the co-host of That Metal Show, which recently completed its 14th season on VH1 Classic. You can also catch Jamieson on the stand-up comedy circuit. Keep up with him at his official website or his Twitter page. Please note that Don Jamieson’s opinions do not necessarily reflect those of Loudwire. Check out his picks for the Top 10 Songs About Cemeteries below:

A late-night walk through a cemetery can be like sex with Courtney Love … dark, creepy and terrifying. But unlike intercourse with said person, cemeteries can also be beautiful and serene. You know, as long as you’re not one of the tenants.

According to Feng Shui, if you live too close to a cemetery the disembodied souls of the dead can wander out of their graves and haunt nearby houses. No problem. As long as they don’t knock over my bamboo laughing Buddha fountain or screw up any nonphysical forces and energies. Also, please don’t knock over my “Bark at the Moon” lunchbox.

It wasn’t easy but I worked the graveyard shift to compile the ultimate 10 songs about our final resting place:

Tombstone writings: “In my heart I’m at war, tripping over these tombstones…”

I once had sex in a graveyard. It was great! Until all the mourners started complaining.

“I Was Buried in Mount Pleasant Cemetery”

Tombstone writings: “By summer I was gone, my remains stolen from the ground. My body never recovered and I was never found…”

If you could actually write your own obituary, it would sound something like this. An 8-minute beautifully depressing masterpiece. RIP David Gold.

Tombstone writings: “You gave me wings and took the sky away, clawing and fighting to live another day…”

Kirk Windstein, The Beard of Doom, The Riff Lord, whatever he shall be called, has created a first rate cemetery slab of sludge with this angelic anthem.

“House By the Cemetery”

Album: Transylvania 90210: Songs of Death, Dying and the Dead

Tombstone writings: “I hear the devil and he’s calling me, in the house by the cemetery…”

Pretty decent chance that any band with an entire album about the dead and the motto “Life’s a Grave, Dig It” is going to chart on this cemetery list.

Tombstone writings: “In your mind you’ll hear them sing, every night at the graves…”

I don’t mind the sound of ghouls, spirits or ghosts singing nightly at the local cemetery. As long as it isn’t Maroon 5.

Tombstone writings: “Golgotha rise up from your tomb, devil’s had a taste of holy water…”

Golgotha is an ancient place of burial and the hill in Jerusalem where Jesus was crucified. So, makes perfect sense that the Metal God wrote a song about it.

Tombstone writings: “I don’t wanna be buried in a Pet Sematary, I don’t want to live my life again…”

“Into the Crypts of Rays”

Tombstone writings: “Gilles de Rais the perverted son, the holy man hanged by nobility, into the crypt of rays…”

A play on the name Gilles de Rais, who was convicted as a serial killer of children and hung in France. The one person even Jared Fogle can look down on.

Album: The Sound of White Noise

Tombstone writings: “I find love in what I steal, you should’ve let me rest in Potter’s Field…”

I find love in what I steal too. Hypothetically. That’s if I actually do steal. Allegedly. But really, who actually pays for Splenda these days?

Tombstone writings: “Believe the word, I will unlock my door and pass the cemetery gates…”

I mean, seriously…how could this not be the world heavyweight cemetery champion? Simply put, it’s the Floyd Mayweather of burial ballads (without the tax evasion and domestic abuse).