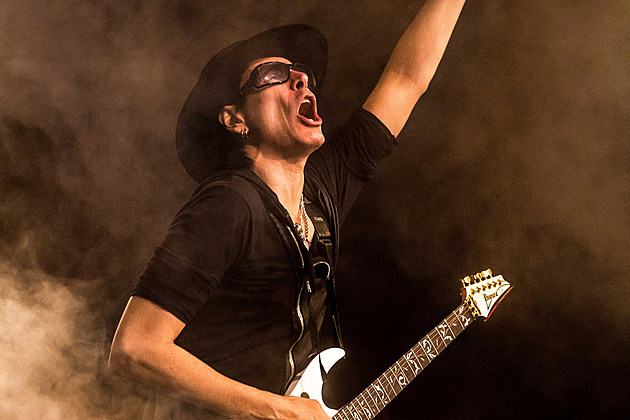 Guitar virtuoso Steve Vai has been reunited with his beloved guitar ‘Bo’ after the instrument was stolen at a benefit show earlier in the week. The custom axe would have been hard to miss should it have made its way onto the Internet for sale or even at a local pawn shop. Following the concert, Vai posted detailed pictures to Facebook along with notable features that make the guitar so distinguished.

The one-of-a-kind guitar was returned to Vai anonymously and the culprit will more than likely remain in the shadows. The guitarist’s Facebook page announced the good news on his behalf, detailing how it was returned and expressive gratitude for having it back.

Great news everyone: Bo, Steve’s mirrored JEM that went missing this past weekend, has been found left in the bushes at the gate on Steve’s property. We do not have any more details on how it got there and will perhaps forever remain a mystery. The entire Vai camp is grateful for all the amazing outpouring of support we have seen regarding this issue over the last week. Bo is now ready for 2016 and all the notes she will once again be singing from Steve’s fingers and soul. 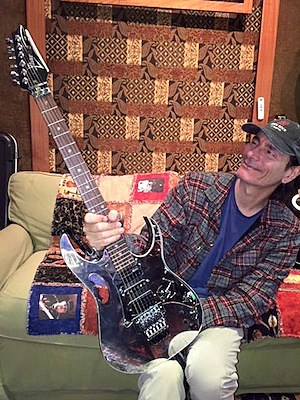 While playing a charity gig for Tony McAlpine, who has been diagnosed with colon cancer, Vai, Zakk Wylde, Tom Morello, John 5 and more performed with drum icon Mike Portnoy and bass legend Billy Sheehan to raise money for the ailing guitar and keyboard luminary. The Dec. 12 show took place in Los Angeles and Vai commented, “It’s a great privilege to take to the stage with my friends Zakk, John, Mike and Billy in support of our dear friend Tony. Tony has always been blessed with an exceptional talent and more so, he’s an exceptionally cool guy. It’s a great cause and will be a magical evening of guitar extravaganza.”

In late November, Steve Vai was slated to perform with Billy Sheehan and drummer Gregg Bissonette, reuniting three of the four members from the David Lee Roth Eat ‘Em and Smile band. The line for the show grew out of control and the fire marshall forced the cancelation. David Lee Roth was also in attendance and Sheehan posted “And boy did we have a surprise for you!” Steel Panther‘s Ralph ‘Michael Starr’ Saenz was billed as the singer for the night and has plenty of experience singing David Lee Roth’s material after spending years in a Van Halen cover band.