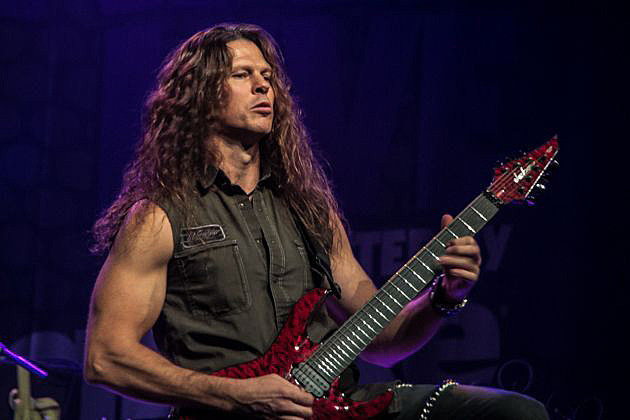 One of the best things about the rock and metal communities is the sense of family it creates. Fans and musicians unite under all sorts of causes from charitable organizations to benefit shows and more. Former Megadeth guitarist and current Act of Defiance axeman Chris Broderick has decided to auction off his guitar to help support the wife of former Nevermore and current Ghost Ship Octavius drummer Van Williams.

The guitarist has put his Jackson guitar up for auction on eBay and fans who would like the chance to own it can bid here. Broderick made the announcement on his Facebook page and revealed the guitar was used on tour during his tenure in Megadeth.

I am selling one of my own Jackson CB-6 signature USA 6 string guitars! All profit will go to Van and [Dore] Williams (Ghost Ship Octavius, ex-Nevermore) who are still dealing with all of the expenses of their fight with cancer. I have played it across the world with Megadeth and it does have some wear due to me thrashing around the globe with it (see pictures) but plays and sounds great. I will sign it where the winning bidder would like which would make a great collectable item in anyone’s guitar collection.

There is only a couple of weeks left until Christmas so pick this great guitar up and remember that it’s to help Van and [Dore] with their fight against cancer. Thanks so much.

Dore Williams was diagnosed with Stage III ovarian cancer in April and underwent surgery shortly after and began aggressive chemotherapy treatments as well. A GoFundMe page was launched the same month to help the Williams family with mounting medical bills. To make a donation, visit the page here.

Act of Defiance was formed by Broderick and drummer Shawn Drover following their departures from Megadeth. Rounding out the lineup is guitarist Matt Bachand of Shadows Fall and vocalist Henry Derek Bonner, formerly of Scar the Martyr. The band wrapped up a tour in support of their debut album Birth and Burial with death metal act Allegaeon.

Loudwire would like to extend well wishes towards the Williams family and all those close to them.