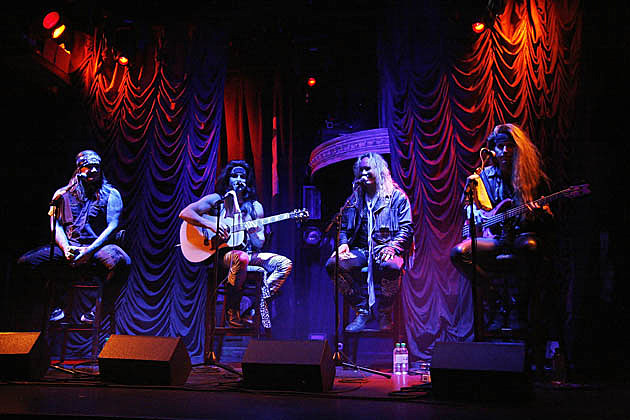 Steel Panther, known for their finely-crafted glam metal compositions mixed with brash toilet humor, will be tuning it down with a new release coming in February. Well, the amps will be turned down, but not outrageous frontman Michael Starr. The band will be releasing their first-ever live acoustic album, which will also contain some new songs.

“It’s gonna be accompanied with a DVD as well. We’re gonna debut a few new tunes on this actual unplugged, and we’re not gonna put out the new songs recorded [on a proper studio album]… We’re gonna actually record them live and release ’em,” Starr told Another FN Podcast With Izzy Presley (transcription from Blabbermouth). Steel Panther infamously have one acoustic song under their studio belt, the crude “Girl From Oklahoma,” and will surely put creative spins on existing hits to exploit the stripped down tunes, furthering the hilarity of their brand.

The album has already been given a title, but the singer declined to reveal it when speaking with South Detroit SoundHouse earlier this month. He said, “The title is really cool. We fought tooth and nail with the record label regarding the title, ’cause they wanted us to change it. And I said, ‘No. I ain’t changing nothing.’ And we didn’t. So you’re gonna love the title. It’s f–king sexy.”

Steel Panther’s last album, 2014’s All You Can Eat, boasted the singles “Party Like Tomorrow Is the End of the World,” “The Burden of Being Wonderful” and “Gloryhole,” the last of which brilliantly showcased the band’s humor in a NSFW video.