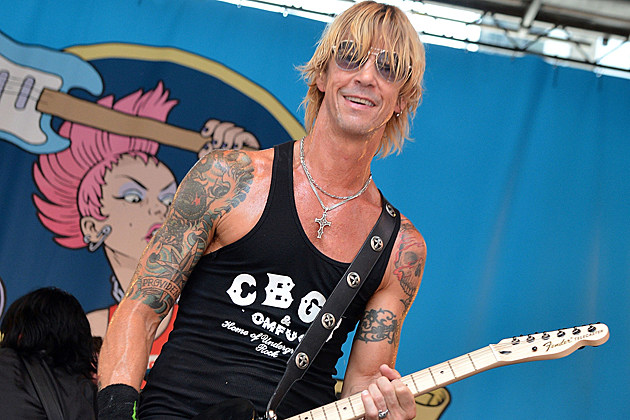 The teases are coming hot and heavy for Guns N’ Roses fans. The latest hint that something is afoot with the classic Guns N’ Roses lineup comes courtesy of bassist Duff McKagan.

Late Sunday night (Dec. 27), the musician tweeted out a photo of his arm holding his bass with the tattoo “LAMF” visible. McKagan prominently displayed “LAMF” on his bass amp during the Guns N’ Roses “Use Your Illusion” tours and also in the band’s video for “Yesterdays.” Check out his tweet below.

For a little more history, “LAMF” stands for “Like a Mother F–ker,” which is the name of an album from Johnny Thunders and the Heartbreakers. Duff had long been a fan of Thunders and dedicated the Use Your Illusion II song “So Fine” to Thunders, who passed away before the band was working on the disc. McKagan sang lead on the track, and he also covered Thunders’ “You Can’t Put Your Arms Around a Memory” on Guns N’ Roses’ covers disc, The Spaghetti Incident.

While it could be just a nod to Thunders that McKagan posted “LAMF,” neither Thunders birthday or death date coincide with the posting. But “LAMF” does have plenty of ties to McKagan’s Guns N’ Roses career. It can be viewed as the latest tease, following on the heels of the recent updating of Guns N’ Roses’ website to feature their classic “bullet” logo and the video teaser that has been playing in front of Star Wars: The Force Awakens.

Earlier this year, Slash stated that he was on friendly terms with Axl Rose. Just prior to that news, the exits of Ron “Bumblefoot” Thal and DJ Ashba were confirmed, which really started the rumor mill rolling. There have been rumors of a reunion, but the most frequent rumor is a mix of current and classic players taking the stage. Stay tuned to see how it all plays out.