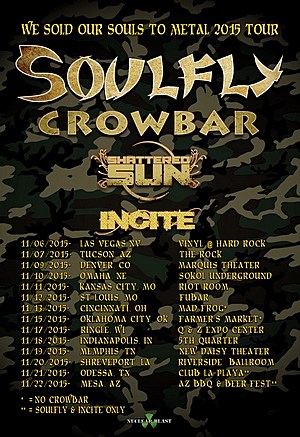 After announcing the “We Sold Our Souls To Metal” tour earlier this year, Soulfly have added additional November dates with a slightly different lineup. The previously announced first leg of the trek kicks off Sept. 30 in Los Angeles features Decapitated and Shattered Sun, wrapping up Oct. 30.

Except for the final two shows, Shattered Sun will continue to open the newly announced part of the tour that resumes Nov. 6 in Las Vegas. Crowbar will play most of the dates, with Incite along for the entire second leg. Tickets go on sale Sept. 4.

“If you sold your sold to metal and truly love it, I command you to get in the pit,” says frontman Max Cavalera. ”I’ll be looking for you!”

Soulfly are touring in support of their latest album Archangel, which was released last month. In a recent interview, Cavalera talked about the inspiration behind the record. “I thought it would be cool to do something more biblical and that’s why the album is called Archangel,” Cavalera revealed. “I thought the album name was cool, different but simple and still a strong name.”

Cavalera also says, “Everything on this album reflects what I like to listen to. It’s a new phase for Soulfly.  Matt Hyde was great in the production of this album.  He helped me a lot and he really understood what Archangel was all about. He even helped me with adding some kabbalah stuff in the lyrics.  We used a lot of different Latin words in some of the songs, so it was a really exciting project! I worked really hard on this album for the last six months, but it definitely does not feel like our tenth album.  Archangel feels like one of our first records! ”