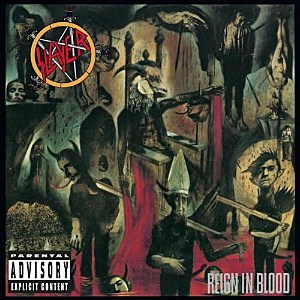 “The band wants a goat’s head on the cover.”

Those may not be the exact words that producer Rick Rubin told illustrator Larry Carroll when they met at New York’s Café Figaro to discuss the front sleeve of Slayer‘s third album, but it was all the direction the artist was given. Well, that and an advance cassette of Reign in Blood.

That was enough. Between getting his ears pounded by future classics like “Angel of Death” and “Raining Blood” and the artist’s natural proclivities, Carroll had more than enough to work with. D.X. Ferris quotes the illustrator in his 33 1/3 book on Reign In Blood:

“Their lyrics are quite visual…..They’re always quite provocative, always touching on subjects that a lot of people shy away from. They certainly don’t hold back. So it was suited for the kind of work that I do.”

The kind of work that Carroll did (and still does) was raw, brutal, immediate. In an interview with Stylus, the artist talks of drawing with his eyes closed and working with “banal colors — which most people can’t stand.”  In other words, he was the perfect candidate for a Slayer cover.

Apparently the band didn’t think so, though. Back in ’87, Kerry King told Metal Hammer that, “We were stuck with it. Some warped demented freak came up with the cover.” Years later the guitarist clarified that his distaste probably stemmed from thinking that the illustration didn’t seem very metal, but “turned out, it redefined metal artwork.” For his part, Carroll recalls that the band didn’t like his cover until one of their mothers disapproved of it — always a good sign for a metal album.

Columbia, Def Jam’s distributor, wasn’t too keen on the cover, either. The album’s release was postponed while Def Jam looked for another distributor, finally settling on Geffen.

What Rubin and Slayer got for their artwork dollar was nothing short of a modern Garden of Earthly Delights, Heironymous Bosch’s 15th century depiction of Hell that still leaves viewers wondering what kind of hallucinogens were floating around the Netherlands in 1490. Carroll updated Bosch’s vision by impaling his buddy Tom Dillon with a spear and hanging him on the wall in the background, sticking pope hats, or mitres, on demons and giving them (the demons, not the hats) erections, and in the middle of it all he included the requisite goat’s head.

That goat-headed beast is not Baphomet or any other specific demon, according to the artist, but the authors of The Art of the LP assert that the figures carrying his throne are members of the band. Neither this nor pretty much any other detail about the image have been verified by the artist. “I don’t like to talk too much about the specifics of an image. It kills it in a way,” Carroll says in Ferris’s book. “People can fill in the images themselves, try to figure it out. That’s what I most enjoy about making images: they’re not so conclusive; they’re open-ended.” Among the special guest stars rumored to appear on the sleeve are Paul McCartney, Pope John Paul II, Hitler and Jesus.

We do have some technical details, however. Carroll worked big: the original artwork was three feet by three feet, triple the size of an album cover. He worked in a blend of oils, acrylics, and collage, using a photocopier to resize images to suit his purposes. In Ferris’ book, Paul Romano, an artist known for his Mastodon cover art, sums up both the piece’s colors and composition: “The palette and the spiraling composition drop us into a dark, nauseating dream ripe with demons and body-horrors that haunt the collective unconscious.”

It may have been a rough road at first, but Carroll’s cover illustration is now considered a true classic that would look right at home hanging next to Bosch or any other fine artist. Blender once ranked the artwork among the 10 best heavy metal album covers of all time.

Unfortunately, the original is long lost. The illustrator gave the Reign in Blood artwork to a “schmuck” (his word) who pretended to be enthusiastic about owning it but then sold the piece, a particularly cruel thing to do given Carroll’s interest in seeing his art in appreciative hands. (Ferris cites a pre-Reign incident where the artist stole back a painting he sold because he didn’t trust the new owner with it.)

Carroll returned to the politically-oriented illustration work that he was doing for publications like the New York Times and the Village Voice, but when Slayer called in ’88 he knocked out another classic cover for South of Heaven. He also created the sleeve for Seasons in the Abyss and the the controversial Christ Illusion album cover, making Larry Carroll’s artwork as synonymous with Slayer as Derek Riggs’ work is to Iron Maiden. His only other known album cover is hip-hop artist’s Ill Bill’s 2009 album, The Hour of Reprisal.