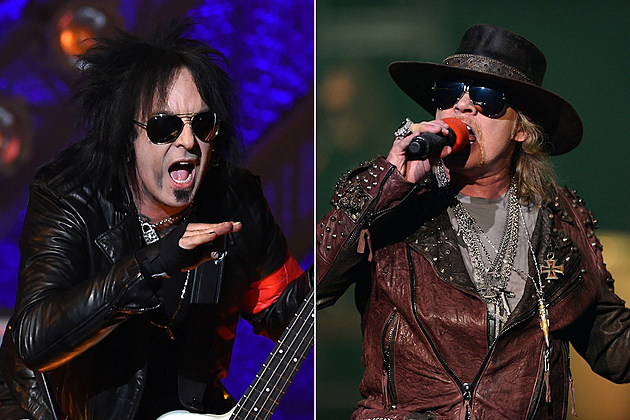 There’s more fuel to add to the rumors of the reunion of the classic Guns N’ Roses lineup. Speculation has been swirling for months about the possibility and Motley Crue bassist Nikki Sixx has added to the speculation, stating that the band is not only reuniting to tour, but that “everybody knows.” When a fan asked on Twitter if he thinks the band should reunite and do a tour, he answered with a rather definitive statement.

Given Sixx’s association with now former Guns N’ Roses guitarist DJ Ashba in their band Sixx: A.M., his words addressing the topic hold a little more weight. It should be noted though that the Crue bassist has removed the tweet from his page. 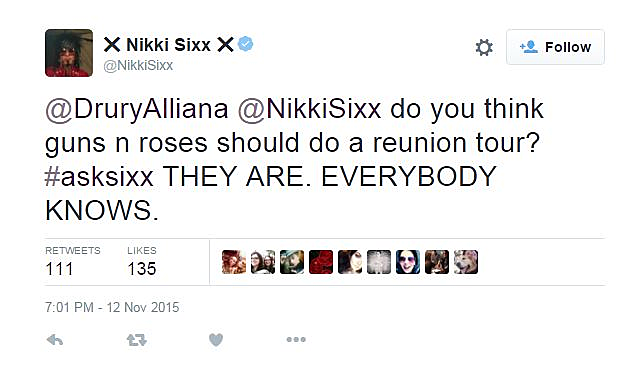 Sixx is not the only one this week to potentially leak the news as Brandi Glanville, friend of Duff McKagan‘s wife Susan Holmes, expressed excitement over the reunion. Glanville stated in a video, “Guns N’ Roses is coming back motherf—ers!”

Earlier today (Nov. 13) Vicky Hamilton — former management consultant for Motley Crue and early manager of Guns N’ Roses — posted a statement on her Facebook page a few hours after Sixx’s tweet stating she was texting with Slash and he said the tour is not happening.

The anticipation is almost reaching a boiling point and Guns N’ Roses even tweeted some ambiguous words regarding Glanville’s statement, letting imaginations run even wilder.

While other musicians from Scott Weiland to Gilby Clarke have weighed in on whether they think the world will see a reunion of one of the most visceral lineups ever assembled in rock history, nothing remains confirmed as of yet. Reports are circulating that the band is just days away from making the announcement, with Dish Nation going all the way and confirming the reunion exclusively. Their website stated:

Slash and Axl have verbally agreed to get things together again and reform the original band. The live shows is where they can show the world what they had and also make the greatest earnings.

Promoters are quietly working away to land opportunities. Details of the reunion are expected to leak out in the next few days. Everyone is expecting huge demand for tickets, but the boys are very humble and are not sure what to expect.

At this point it appears nothing is definitive and fans will have to wait for official word from Guns N’ Roses themselves before we can all celebrate. As mentioned, the big rumor is that the band will be making an announcement in the coming few days. Stay tuned as we take this roller coaster ride together.

Steven Adler: ‘Slash and Duff Don’t Believe in Me’