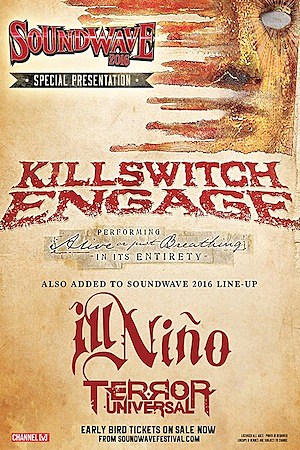 The Soundwave Festival is Australia’s biggest metal and rock attraction, bringing the festival to three major cities on the isolated continent. Routinely booking some of the biggest bands in the all-encompassing genres, 2016 is no exception with heavyweights like Disturbed and Bring Me the Horizon topping the lineup. This year will also see an extra special set performed by metalcore titans Killswitch Engage as the band get set to perform their 2002 classic Alive or Just Breathing in full!

The band’s sophomore album was one of the first landmark releases as the New Wave of American Heavy Metal was just getting its stranglehold on extreme metal. Alive or Just Breathing was the last album to feature singer Jesse Leach until his comeback in 2012 following the departure of singer Howard Jones.

Ill Nino and Terror Universal have been added to the Soundwave 2016 lineup and join an already star-studded bill that boasts Deftones, Bullet for My Valentine, NOFX, Metal Allegiance, Hatebreed, Soulfly and more. The Metal Allegiance lineup will be shaken up a bit, adding Phil Demmel of Machine Head, Mark Osegueda of Death Angel and Troy Sanders of Mastodon to the band’s core of Mike Portnoy, Alex Skolnick and Mark Menghi.

The traveling festival will make three stops in Australia, hitting Brisbane on Jan. 23, Sydney on Jan. 24 and Melbourne on Jan. 26. For full lineup and ticketing information, be sure to visit the Soundwave Festival site.

In other Killswitch Engage news, Jesse Leach recently posted on his Instagram page that he expects a March release for the new Killswitch Engage album, but removed the post shortly after. The performances of Alive or Just Breathing will kick off what is expected to be a big year for the band.