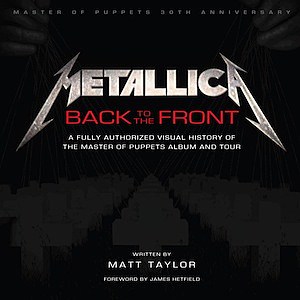 It’s a huge year for Metallica on several fronts. With the overwhelming success of ‘The Night Before’ pre-Super Bowl performance that streamed live and is up for download behind them, the thrash merchants are looking to the future with a new album in the works and to the past as they celebrate the 30th anniversary of Master of Puppets. One of the plates the band is spinning is the Metallica: Back to the Front photo book that looks back on the album and subsequent tour. The band has given fans a teaser, offering a revamped cover of the book and even sharing a few pages (see below).

The book, which is touted as “a fully authorized visual history of the Master of Puppets album and tour” was compiled from a combination of the band’s personal archives, fan submissions of photos, videos and anecdotes as well as members of Metallica’s crew and tour openers Anthrax and Armored Saint. Written by Matt Taylor, the visual aspect will be accompanied by extensive interviews from all those involved with the album. Perhaps the biggest treat, Back to the Front will also feature an interview with Cliff Burton‘s father, Ray.

While no release date has been set, as is the same with the looming new album, Metallica are once again showing their appreciation for their generations of fans who have made them not only one of the biggest metal bands in the world, but one of the most successful acts in the history of music. Always giving back, they’ve served up a sneak peek of some of the goods beyond the book’s cover, which can be seen below.

Metallica recently made a guest appearance on the HBO series Billions as the show’s characters attempt to let off some steam by flying out to one of the band’s concerts in Quebec, Canada. The creators of the series are longtime fans of the band and wrote the episode with the thrash giants in mind.