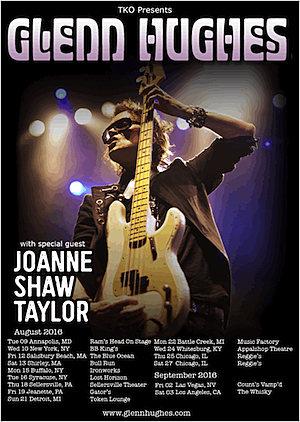 Lord of the four strings and king of the high notes Glenn Hughes has been forced to reschedule his U.S. tour that was originally slated to kick off in San Jose, Calif. on March 2. The living legend recently underwent a double knee replacement and is suffering from some complications that will keep hime sidelined and off the stage for a short while.

“I am sorry to say that some recent setbacks in my recovery from knee operations are the reason that I can’t get out to see everyone as soon as I had hoped,” Hughes lamented, adding, “I want to make sure I give my fans the best live experience possible and promise it will be worth the wait. I can’t wait to see everyone at the shows.” The icon will launch the rescheduled tour on August 9 in Annapolis Md., dotting the run with big cities like New York City, Chicago and Los Angeles, where the run will conclude on Sept. 3.

Hughes will be performing cuts from across his vast catalog, including Trapeze, Deep Purple, solo records, Black Country Communion and California Breed. Blues rock singer Joanne Shaw Taylor will be the opening act on each night.

Hughes still plans to appear with Deep Purple as the band is inducted into the Rock and Roll Hall of Fame on April 8 at the Barclays Center in Brooklyn, N.Y. He performed on three albums with the group following the departures of singer Ian Gillan and bassist Roger Glover (who are also both being inducted) and shared vocal duties with singer David Coverdale, who would go on to form Whitesnake. Hughes’ work with Deep Purple includes Burn, Stormbringer and Come Taste the Band.