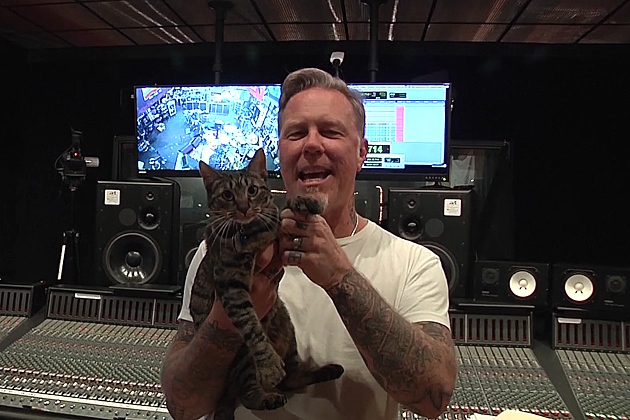 Ah, the gift of giving! This is something Metallica understand well, constantly engaged with their fans and always serving up something special for the ones who have made the band the undisputed titans they are today. In the spirit of the holidays, the thrash quartet have unleashed a clip of a new Metallica song for their fan club members so the whole family can sway to Metallica’s beat as they rock around the Christmas tree.

The video clips opens up with James Hetfield wishing everyone happy holidays as he holds his ever-squirming cat Tabs in his arms. As a gift, he has the furry feline hit play on the computer to reveal a snippet of a new Metallica song! As soon as the song starts, Hetfield can’t help but exclaim a signature “Oh yeah!” as he’s excited at the chance to share it with the fans. The snippet features a trashy riff along with Hetfield’s signature vocals. The sneak preview is for Met Club members only, but membership is free! To view the clip, click here, and if you aren’t in the Met Club, a link is available to sign up right on the page.

Next year will be a big one for Metallica. In addition to what all hope will yield a new album, the year will also mark the 30th anniversary of Master of Puppets. That album is one of the cornerstones of the metal canon and the last to feature late bassist Cliff Burton. The band is readying a photo book to commemorate the anniversary, full of never before seen photos from the band’s personal archives as well as extensive interviews from the band, crew members from the tour and more.