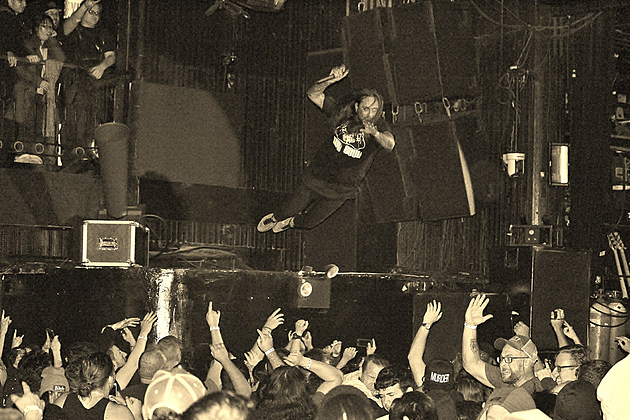 Australian deathcore stalwarts Thy Art Is Murder will be heading into 2016 without their vocalist CJ McMahon. After six years with the band and appearing on all three studio albums, the singer has made the decision to step down, citing personal and financial reasons as his motivation.

The singer announced the news on his Facebook page, detailing his plans for the future and how he could no longer be burdened by the financial strains of being in the band. With a wedding on the horizon and intentions on starting a family, he realized the only logical choice was to leave Thy Art is Murder. His statement reads,

With a mix of both negative and positive emotions, I inform you all that I have parted ways with my band Thy Art Is Murder. It has been a wild ride I have travelled to over 40 countries around the world and played alongside some of the worlds biggest and best bands, it brings me great sadness knowing I will never perform again for my amazing and supportive fans, this will be the hardest thing for me to deal with. My reasons for leaving: I spend too much time away from my fiancé , family and friends, touring has taken a massive mental, emotional and physical toll on me. One of the biggest reasons is money, I / we have been broke for years and being 32 years old I can’t live like this anymore. I am getting married next year and plan on having a family, these things cost money, to put the finances into perspective for you I /we have earned between $16k-$18k each over 6-7 years, I feel there is something massively wrong with this, I will not live like this anymore. I’m sorry to my fans that I have to go, I have loved you all and I thank you for believing in me supporting me. The money made from my closing down sale of my clothing label will be going to my wedding, I will also be selling my Northface stage jacket I have worn the last two years on stage via eBay soon to try to pay for my wedding for the people interested, again thank you for the love and support, Your Prince Of Darkness Cj

The rest of the band released a statement on the Thy Art Is Murder Facebook page, acknowledging McMahon’s reasons and defending him, despite being upset that their friend has left the band. With a European tour coming up, the members stated they will be continuing and have tapped Molotov Solution vocalist Nick Arthur for live duties.

Thy Art is Murder recently completed a North American tour in support of Parkway Drive and Miss May I. Click here to see a photo gallery from the New York stop on the tour. The deathcore outfit were out promoting their latest release, Holy War, which came out June 30 on Nuclear Blast.

Baby Sings Along to Thy Art is Murder