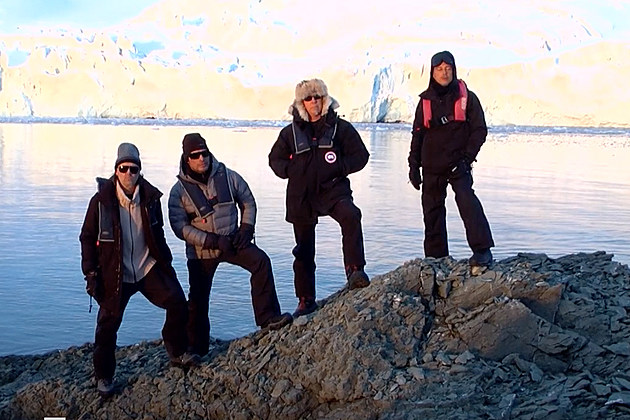 Metallica recently re-launched their website and made their fan club available for free to anyone interested. That move is already paying dividends for those who’ve joined and for those who’ve not, here’s another incentive. The band is offering their Freeze ‘Em All documentary as a free download to Fifth Members.

The film was shot and directed by Adam Dubin during the band’s 2013 trip to Antarctica to play a special show for contest winners. The performance helped the band set a record of performing on all seven continents, but as Lars Ulrich reveals during the documentary, those trying to match the record may have some trouble. In 2013, not only did Metallica complete the task, but they also managed to play all seven in one calendar year.

Freeze ‘Em All is a fascinating look at the band’s show and their tour of the area surrounding the performance. We see Metallica playing the frigid area inside a clear dome where fans can look out and see the wildlife as well. The group also staged what they called a “silent disco,” with all of the fans inside the dome given headphones to plug in to exactly what the band was playing or they could simply just listen without the headphones. It was a very intimate performance, with fan club winners from around the world getting the opportunity to fly in and enjoy the record-setting show.

The gig took place at the Carlini base in the South Shetland Islands of Antarctica and during the visit we also see Metallica exploring the beauty of the winter wonderland, taking boats around ice shelves, seeing penguins, whales and seals, exploring fossils and more. “We love to get out of the house and explore and there’s no better place to do it than right here,” says Ulrich in the film.

The band says in a statement, “On Dec. 8, 2013 we found ourselves playing a gig for a couple dozen friends, fans and penguins at Carlini Base in the South Shetland Islands of Antarctica. The gig capped off a year where we were fortunate enough to set foot and perform on all seven continents during a 12-month period.”

They add, “While we were down in Antarctica, our friend Adam Dubin (A Year and a Half in the Life of Metallica) followed us around with his camera catching a few moments of us on a boat with our crew and our fans, checking out the unbelievable sights that Antarctica had to offer and performing our own silent disco under a dome. It was truly the most unusual show of our career and an unforgettable journey.”

If you’re a Fifth Member, you’ll be able to access the film immediately. If not, a simple entry form and email verification will allow you to watch. Check here to download.