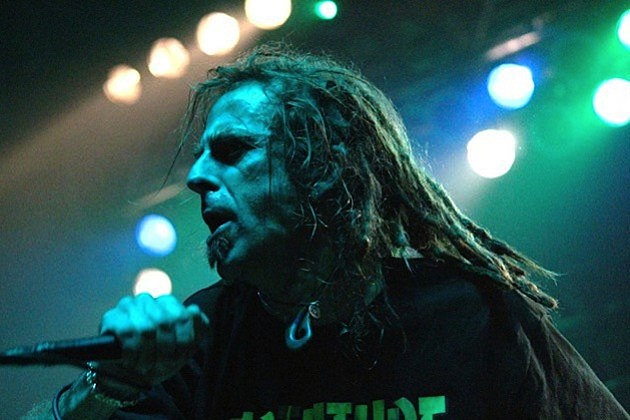 Lamb of God recently bowed out of their European tour amidst safety concerns in the wake of the recent Paris terrorist attack. Though the band has issued a statement on the matter, frontman Randy Blythe has delved a little further into the cancellation via his online blog.

The vocalist reveals he was asked to speak at the request of management, though he wishes not to feed into the atmosphere of speculation and fear that surrounds the current terrorist activities. He also says he makes his new comments on his own and doesn’t claim to speak for the band.

“Here is what I have to say, and it’s all I’m going to say on this matter, PERIOD. Those with just half of a functional brain in their heads will easily understand, the rest… well, who really gives a f–k what you (don’t) think anyway? Certainly not me,” says Blythe. He adds, “Obviously, no working band wants to cancel a tour, especially once it is underway — fans get disappointed, a lot of money gets lost by several different groups of people, a massive amount of time is wasted by all parties involved, it’s generally an all-around bad business move, and (trust me) it’s just a huge pain in the ass. My band is not in the habit of cancelling tours, so unless there is a family emergency, we carry on regardless of almost anything.”

The singer goes on to reveal a multitude of things that have happened both physically and otherwise that could have led to cancellations over the years, but they ultimately decided to play. Blythe continues, “Something really, really serious (and utterly heartbreaking) did occur in Paris, prompting several bands to go home early or cancel upcoming tours — I couldn’t blame them. But my band didn’t leave — we paid attention to what was going on, evaluated the situation the best we could, and decided to continue on with the tour. Despite some obvious concerns, it felt like the right thing to do.”

The vocalist recalls the events of Nov. 13, adding, “Sitting in a hotel room in London, as I followed along in real-time during the tragic massacre in Paris at Bataclan I could see the layout of the club in my mind, and I thought, ‘That is a terrible spot to be trapped in like that (which of course is exactly why the gunmen chose it)- God help those people inside.’ It was sickening to me that people were dying just because they wanted to see a rock show, and what made it worse was that I could clearly envision it happening as it went down. I’d played that club several times before. 89 people died in Bataclan that night, including one individual known to several crew members of our tour.”

After a few days of the tour, Blythe says it felt like the right thing to do to continue to play. He adds, “The band and crew flew to Stuttgart, Germany. We had originally planned to ride the ferry from Dover, England to Calais, France and from there make our way to Germany, but after the bombings and shootings in Paris the French government shut the borders, and we figured either the ferry wouldn’t be available or it would just be a complete security nightmare, so we spent money on flights. Imagine my surprise when I talked to our bus driver the day of our gig in Stuttgart, asking him how crowded and hectic the ferry ride was. ‘Oh, no, it was almost empty,’ he said. ‘And when we got to France, we were just waved in — there were no cops there at the border or anywhere in sight.’ Umm… ok. That seemed just a little loose to me, given that just three days previously men who had traveled from a nearby different country had blown themselves up in Paris after massacring over 100 human beings, but I’m no security expert, so what do I know, right?”

Right before Lamb of God were to walk onstage in Stuttgart, Blythe says he saw on the news that a soccer stadium just north of where the band was playing in Hannover was evacuated due to the threat of explosives. But the band still played and it was a great gig for the most part.

But the next day in Tilburg, Holland, Blythe says they received news from their tour manager that an occurrence had happened and that he no longer felt safe. “At that moment, it no longer felt like the right thing to do anymore, not at all. It did not feel like the right thing to still stand on stage and tell people ‘Don’t worry about it — come on in and enjoy yourselves. There’s no need for concern,’” says Blythe. “It did not feel like the right thing — not for myself, not for the people I employ, and not for our fans. Things had quickly changed — it felt foolish, it felt irresponsible, and it felt potentially very, very dangerous.”

He concludes, “As I mentioned earlier, I do not wish to add more rumors or speculation to an already tense and constantly shifting situation in Europe, so I won’t go into details. Suffice it to say, this new specific piece of information (not some nebulous news story about the generally pensive atmosphere pervading Europe at the time) gave me enough to pause to think, ‘I am not going to chance endangering the lives of myself, my crew, and the 1,800 or so fans expected to show up this evening by going on with this show. I can’t tell these people they are safe in here. It does not feel right, screw this, I’m out of here.’ Furthermore, what I had just been told made me think, ‘Even if it’s nothing tonight, I’m not going to go through this every day. Our job is done here for now — it’s time to go home. It doesn’t feel safe enough to cram ourselves and hundreds of people into venues anymore. And I wasn’t the only one who thought or spoke that way, but since I’m writing this, I’ll own it here. That was my judgement call, I stand by it, I was at the time (and I remain to this very second) completely and utterly 100 percent unapologetic about it to anyone anywhere, and if placed in the same situation right this instant the only thing I would do differently would be somehow get the words ‘F–k this, I’m done’ out of my mouth quicker (which would probably be difficult, but I would damn sure try).”

Blythe says he feels good about the decision, despite a few grumpy fans, adding, “No one got hurt that night. To my knowledge, everyone made it home OK.”

The singer concludes, “Once a few years ago in Europe, I made a poor decision to let a show go on, despite the fact that that show was obviously dangerous and out of control. While the particular circumstances were very different than what was happening in Tilburg, the general problem was the same — there was a possibility that band members and/or fans could get hurt. I ignored that possibility, and as it turned out, a fan did get hurt that night. In fact, he died a month later as a result of his injuries. I went to prison in Europe for a bit over it, got out on bail, then returned to Europe to stand trial and face up to any responsibility I may have had in the matter — that story is pretty well known, so I won’t bother explaining it further. What I will say is that I already have one dead person in Europe forever attached to my name — I won’t add anymore if I can prevent it, no matter who it pisses off or disappoints. I’m not going to play around with my life or the lives of others if I feel there is a dangerous situation I could potentially stop from occurring by simply saying, ‘The show is over.’ It’s not worth it to me, and if someone can’t understand or won’t accept my reasoning, then I have nothing for them but a firmly raised middle finger.”

Read Blythe’s commentary in full at this location.