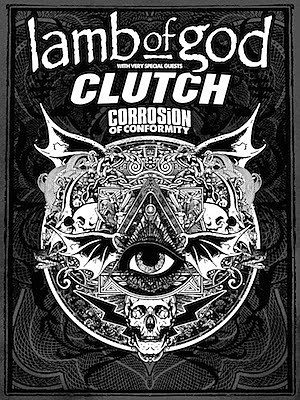 Lamb of God are currently about to wrap up their tour with Anthrax, Deafheaven and Power Trip, but there is no rest for the wicked as they say. The group will head back out on the road at the tail end of March, focused on a more southern sound as they’ll be bringing out Clutch and Corrosion of Conformity as support. Lined with occasional festival appearances, the trek will come to a draw in Manchester, Tenn. at the Bonnaroo festival.

VII: Sturm und Drang is Lamb of God’s seventh studio effort. The disc, released in the summer of 2015, debuted at No. 3 on the Billboard 200, marking the third consecutive album to land in the Top 3. The record touts vicious new cuts like “512” and “Erase This” along with the moody “Overlord” and can be counted among the band’s best material to date.

Clutch will be promoting their 2015 disc, Psychic Warfare, which netted the 20-plus-year veterans their highest chart position yet, ascending to No. 11 on the Billboard 200. Corrosion of Conformity will serve as the opening act on the tour with their lineup that recorded the Deliverance and Wiseblood albums. Vocalist Pepper Keenan rejoined the outfit back in 2014.

Pre-sale tickets will be on sale today (Feb. 9) at 2PM local time with public on sale beginning Friday, Feb. 12 at 10AM local time. For all ticket information, visit the Lamb of God website.