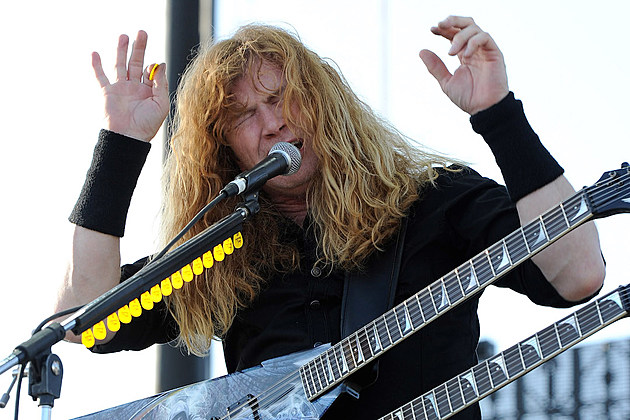 Dave Mustaine has assembled another lineup bursting with talent with the 2015 additions of guitar player Kiko Loureiro and Lamb of God skinsman Chris Adler. The two can be heard injecting their style into the Megadeth sound on their latest album, Dystopia, and while the band ramps up the touring in support, questions come up surrounding Adler’s ability to pull double duty in two active headlining bands. With the fresh blood in the band, Mustaine is also tempted to re-record some classics.

“Well, I think Chris would tell you he wants to play every show, so that’s what we’re trying to do,” Mustaine began telling Musik Universe. “If there are shows that he can’t play, he’s already recommended a protégé of his… not protégé, but somebody who he picked, a handpicked selection. It’s a guy named Tony Laureano, who played with Nile and Dimmu Borgir; he’s one of the top ten extreme-metal drummers.” The mercenary drummer has also played with Angelcorpse, the Black Dahlia Murder, Malevolent Creation and more as well as performing with Megadeth in Asia in October of 2015. He also serves as the drum tech for the band.

When asked if he would ever consider asking Adler to join Megadeth as his full time priority over Lamb of God, the Megadeth mainman responded, “Well I think that’s what I want but I don’t want to cause any problems with LoG at all. I respect the band, that’s his band, and it’s working out right now so I think the best thing is to let the chips fall where they may.”

The frontman remains hopeful never knowing what the future holds and added, “There may be a time where they take a break for a little while maybe and he has more time to work with us.” Discussing about how they can plan tours easier than the early days, he continued, “The good thing for us being in Megadeth right now is we don’t have to tour all the time. We’re fortunately, by the graces of the fan support, we can be a little bit more selective with the tours we do and so on.”

Moving on to the talk that Mustaine wanted to re-record the first album, Killing Is My Business… and Business is Good!, the band leader commented, “If I did go back and record any old songs, it would probably be like a brand new interpretation of our greatest hits, because I think that focusing on any one record and showing an interpretation of all of our great songs by a new lineup would be more exciting. You never know. We might do that.”

Megadeth will be heading out on tour to promote Dystopia, which debuted at No. 3 on the Billboard 200 chart. Support will come from Suicidal Tendencies, Children of Bodom and Havok. For a full list of dates, visit our 2016 Guide to Rock + Metal Tours.