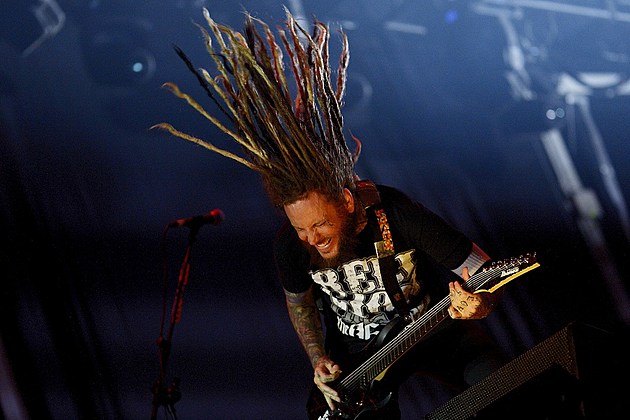 Korn guitarist Brian ‘Head’ Welch is a prolific writer in both in music and in literature. After leaving the band in 2005 with a newfound devotion to religion, he abandoned his drug use and got clean. With the split came some mud-slinging between him and frontman Jonathan Davis, but they reconciled their differences when Welch made guest appearances with the band in 2012 and 2013 before officially rejoining on May 2, 2013. His latest book, With My Eyes Wide Open: Miracles and Mistakes on My Way Back to Korn, deals with his time spent outside of the band in those trying years.

In those eight years, Head had to free himself of addiction, which he did so after converting to Christianity and has been a staunch devotee ever since. In sobering up, he came crashing back down to reality as he was no longer in one of the most successful bands in the music industry. Playing live was different as a solo effort and financial struggles mounted, ultimately leading to bankruptcy and lawsuits. Through all this, Head also had to contend with being a single dad and taking care of a teenage daughter that was battling depression and self-mutilation.

With My Eyes Wide Open will be out May 17. Pre-orders can be placed here and the guitarist even posted a photo on Instagram (seen below) announcing an audio version that will be read by Head himself.

Well, here it is. The first and LAST time I ever read for an audio book. It takes DAYS to complete, and A LOT of patience. Book in print and audio looks like a May 2016 release. Much love & thankfulness to you guys for helping me spread the word and get it out there to the world very soon!

While life appeared to be dragging the guitarist down at every angle, he maintained a strong relationship with Jesus Christ and ultimately wound up on the road that led him to rejoin Korn. With a clear mind and spiritual anchor, Head teamed up with his former bandmates and recorded his first album with Korn in a decade. Paradigm Shift cracked the Top 10 on the Billboard 200, landing at No. 8.

Korn are currently working on the follow-up to the 2013 disc, with Welch calling it “heavier than anyone’s heard Korn in a long time.” The album, which has yet to receive a title, is expected to be released this year, though no official details have been made available.