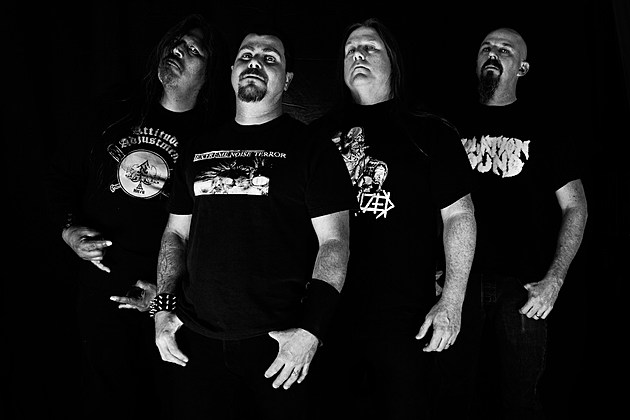 In Part 2 of our interview with Autopsy vocalist/drummer Chris Reifert, he discusses the reason why the band is so selective about playing live, his old band Abscess, writing for Autopsy, and what it was like to work with the legendary Chuck Schuldiner on Death’s debut album Scream Bloody Gore.

Autopsy tour sparingly for reasons that have already been well documented. You undoubtedly get a lot of tour offers. Is there a method to picking and choosing which tours you do? Or does it come down to the convenience / timing for members?

It depends. We haven’t done an actual tour since 1993. The most we’ve ever done is two nights in a row somewhere. Everyone has families, normal life stuff. We can’t go running off for a month at a time. When we were in our 20s it didn’t matter, we didn’t have any responsibility. Not worried about a thing. It’s not like that anymore. A couple of nights away is about all we can do, then we have to get back. It keeps it fun that way, too. I think if it turned into more of a job then it would suck and the fun would be drained right out of it.

It makes every show special.

Yeah, make it more of an event instead of ‘oh yeah, they were here last summer and here they are again.’ We don’t want to be so predictable and have it not be special anymore. It’s just a band for me, we don’t really seek out shows. It’s just what offers come in and see which ones are worth entertaining. There’s a lot of factors involved. There’s timing, location, can we afford it? Is this offer affordable for us? There’s a lot of steps that come into play and a lot of it is ‘would be fun for us?’ If we get a job that looks like it’ll pay decently, but just doesn’t seem like it would be fun we don’t f–king do it. We have to be into the idea, our hearts need to be into it.

When Clint Bower left Abscess, you dissolved the band and reactivated Autopsy. Now, if Clint wanted to come back and do Abscess again, would you consider reactivating Abscess as well?

I can pretty much tell you that’s not going to happen. I know Clint wants nothing to do with that, since Abscess that was it. He actually had no intentions of doing a lot with Autopsy. When Abscess was still going, we were going to do a few things and not get too expensive – playing a few things. Clint said, ‘All right, I’m out of here.’ That was it. Okay, well we can’t do Abscess without you so there goes that and that opened up the door for Autopsy to become quite active. There you go.

Danny and Joe were both in Abscess with you and both bands share a lot of similarities. There’s still a defining line between the two, but what was it like flipping the writing switch from Abscess to Autopsy? Did you ever write anything for Autopsy and say, “That sounds too much like Abscess?”

No, not really because you just have to think about what band you’re writing for. Abscess had a lot more… leeway. You can definitely hear a strong punk influence in Abscess, we never hit that. Then we also did some weird psychedelic stuff on the last few albums, but always kept it brutal and deadly and all that stuff. It’s kind of a weird mixed bag and it was kind of hard for some people to get into that. A lot of people, it’s got to be 100 percent this or I don’t like it and Autopsy is 100 percent death metal. There’s no room for anything else in this band. I’m sure the other guys would say the same thing when we were sitting down at the guitar, writing riffs for Autopsy, we’re just thinking about Autopsy music. Nothing really out of that realm works it’s way in, it’s not really an issue. We’re good at self-editing. If something’s lame, or doesn’t sound like what it should sound like — it doesn’t make it past the room you’re jamming guitar in. By the time we show up together in a rehearsal room, if someone has a song, it’s pretty much edited and figured out and ready to show everybody else.

Have you ever tried your hand in anything besides music to satisfy your obsession with death, gore and everything horrific?

I’ve done some drawings and a few album covers and things like that. I’ve written a few things for some books, some intros and s–t like that, but that’s pretty much it. You know I’m not obsessed with gore and death or anything like that you know when it comes to playing Autopsy it’s you know gotta be that way 100 percent, but I don’t you know sit around and think about it all the time in my normal life. There are plenty of times where I’m just watching stupid TV and not thinking about metal or horror at all or whatever. [laughs] Just having a regular day you know. Sorry to disappoint anybody, but yeah. You know, it’s all tied into my day to day life whether I’m drawing something or writing something or playing something it’s all revolved around music.

So, no plans for any kind of short films or weird comic books?

I have no idea how to do that, [laughs]. If someone approached me and said, ‘Hey, I have this great idea how would you feel about working on something?’ it might be something worth entertaining. But that’s never happened. That’s just out of my field of expertise. I wouldn’t know how to begin or what to do, we’ve made a couple attempts at music videos and it’s always been a f–king nightmare. It’s not something I feel compelled to jump into.

You played on Death’s debut album, which was just you and Chuck Schuldiner. He’s noted as being pretty difficult to work with. Did you have free reign to throw your ideas into the writing, or did he direct your drum parts?

I think it was a little bit of both. From the time when I was in the band, there was no stress or pressure. It was a different game than what it turned into with Death. He had issues with other band members later, but that was never the case with me. When I was in the band, we were both teenagers just getting into dealing with the whole record label thing. There weren’t lawyers involved or anything like that. We were still having a good time. We took it very seriously when it came to the music but, on a personal level we just were having a good time and good friends. Just dorky teenagers. I feel fortunate in that way, there was no aspect of drama whatsoever. It was cool, man. I have nothing but good memories of that time, it was f–king badass.

Drums, if there was a song that I had heard before from one of the demos. I would just keep it true to that. But if it was a song that was written for the album Scream Bloody Gore that no one else had played before, I was able to come up with my own ideas. Once in a while Chuck would say, ‘Oh, and now play a beat like this,’ but I did have free reign to at least come up with my own ideas, whether they stuck or not. It was pretty cool.

Were you involved in the whole tape trading circuit back then?

I never called myself that like some people did. They’d have photo albums filled with a hundred pages of demos they had, that sort of thing. I would trade with friends with a little bit, mostly with other bands. We would trade each other’s demos. There were a couple of record stores in the area here that actually sold band’s demos and bootleg ones, I would say I was more of a collector than a trader. I loved scooping up those demos, it was one of my favorite things. Not a whole lot of trading, except with other bands.

What’s your favorite death metal album of all time?

Oh man, that’s an impossible question. There’s no way I can answer that. I’m a failure when it comes to Top Five. There’s just no way, man. There are thousands of albums that come to mind.

Thanks to Chris Reifert for the interview. Pick up Autopsy’s ‘Skull Grinder’ at Amazon or as part of the ‘After the Cutting’ compilation here, which includes a 92 page book on the history of the band. To read the first part of the interview, click here.

Listen to ‘Waiting for the Screams’ From Autopsy’s Skull Grinder