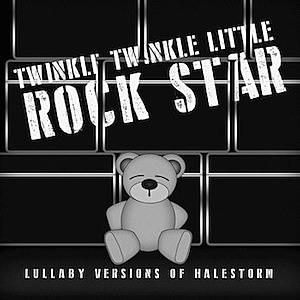 It’s become one of the more popular music series of recent years! Roma Music Group have consistently found ways to turn some of hard rock and metal’s heaviest tunes into sleepy-time gems, introducing toddlers everywhere to the joys of some of the genre’s most classic tunes via the Twinkle Twinkle Little Rock Star series. The latest artist to get the lullaby treatment is Halestorm.

The veteran band are three albums into their career, but they’ve generated a lot of rock radio favorites in a short amount of time. This Lullaby Versions of Halestorm release finds such standouts as “Amen,” “I Miss the Misery” and their Grammy-winning “Love Bites (So Do I)” turned into twinkly renditions that will send little ones off to rock and roll dreams. Get a listen to “I Miss the Misery” in the player below and hear snippets of the other tracks by visiting the order page.

You can currently pick up Lullaby Versions of Halestorm at this location. You can also find Twinkle Twinkle Little Rock Star compilations for acts like Ghost, Evanescence, Faith No More, Judas Priest, Five Finger Death Punch, Tool and many others.

And if you’re looking for something a little harder rocking, Halestorm are currently out on tour. Catch them performing at these stops.

Halestorm Lullaby Version of “I Miss the Misery”

See the Birthdays of Lzzy Hale and Other Rockers