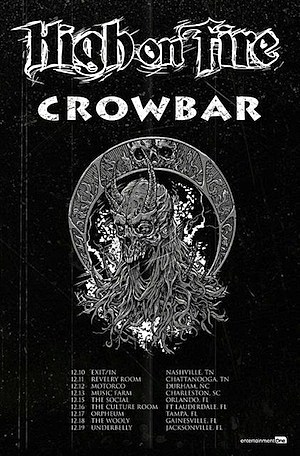 Forget the earplugs, make sure you bring an extra pair of pants! High on Fire have just announced they will be embarking on a short run of U.S. dates with Crowbar in December. The tour will start on Dec. 10 in Nashville, Tenn. and extend through Dec. 19 in Jacksonville, Fla..

This will be a heavy, heavy tour for sure as Matt Pike and the rest of his High on Fire crew ceaselessly deliver some of the most punishing live performances in metal with their mastery over incredible amounts of volume and distortion. Meanwhile, Kirk Windstein and the sludge lords in Crowbar will open each show, bringing their thick and thunderous riffs to get the crowd going.

High on Fire are supporting their latest release, Luminiferous, which was released in June through eOne Music. The album marks the band’s sixth studio release and shows that the power trio have remained at the top of their game since their debut, The Art of Self Defense. The record was produced by Converge‘s Kurt Ballou, who has made an exceptional career behind the knobs and faders in the studio. His distinct production style is a perfect marriage for the sonic destruction High on Fire are renowned for.

Crowbar also have a new album to support in Symmetry in Black, which was released in May of 2014 through eOne in North America. The New Orleans outfit have completed two headlining tours since the album’s release, one with Revocation and Havok and another with Battlecross and Lord Dying.

Both Matt Pike and Kirk Windstein have shared something more than just a love for riffs as both have publicly acknowledged their individual struggles with alcohol dependance. Windstein checked himself into rehab in 2010 and Matt Pike did the same two years later. The two frontmen have openly discussed entering rehab as well as life following their completion in the treatment centers.