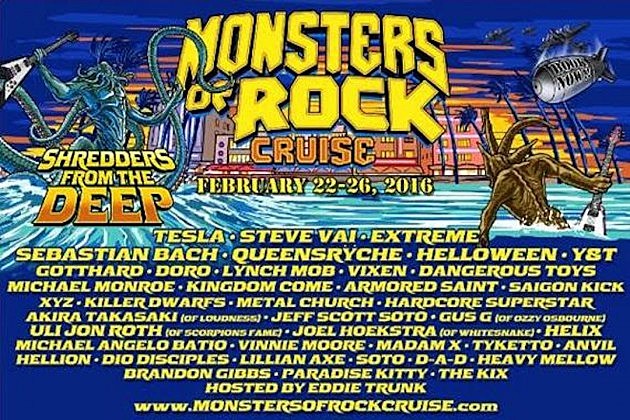 There’s nothing better than hitting the high seas for some great rock and warmer weather during the early part of the year and the Monsters of Rock Cruise for 2016 has a solid lineup you’ll want to check out. There are over 40 acts taking part in this year’s cruise, with Steve Vai, Sebastian Bach, Queensryche, Tesla and Extreme leading the way.

Another key selling point of this year’s cruise is the addition of the Guitar Fantasy Camp at Sea Shredder Clinics, which will be available to all passengers for free as part of the cabin fee. Clinics will be given by Vai, Vinnie Moore, George Lynch, Gus G. Michael Angel Batio and Akira Takasaki, with more instructors expected to be added.

Cruise spokesman Larry Morand states, “The clinics are designed to give our passengers the opportunity to hone their guitar skills in an up close and personal experience with some of rock’s greatest shredders. Fans don’t just watch the artist perform, they make music with the artists.”

The cruise will also offer meet-and-greet opportunities, a Monsters of Rock & Roll Formal, the Monster Gong Show Karaoke, Rock Star Dating, Cooking with Rock Stars, and a So You Think You Can Shred guitar competition.

For additional cruise details, including the booking of cabins, click here.