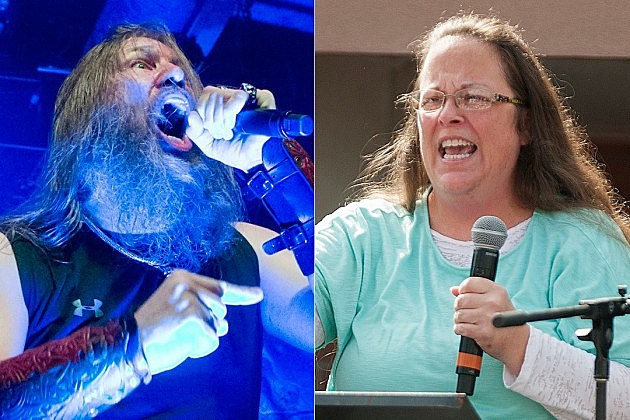 This past week Kim Davis entered the spotlight. The Kentucky county clerk refused to issue marriage licenses to multiple same-sex couples, which started a headline making frenzy and launched some hot button discussion. Amon Amarth vocalist Johan Hegg just threw his opinion into the pot as well, criticizing Davis and telling her to “go live in a cave somewhere.”

Due to the recent Supreme Court decision to allow gay marriage in the United States, Davis can not legally deny marriage licenses to same-sex couples, which she did due to her strong Christian beliefs. She was jailed for five days for contempt of court, but fellow Christians supported her decision while supporters of gay marriage put Davis on the chopping block.

Regarding some recent events here are a couple of thoughts.
It’s ok to have whatever superstitious belief you wish, but you have no right to break the law because of it.
If your job or a job you are applying for dictates that you perform a duty that goes against your “religious belief” feel free to hand in your resignation, or feel free to NOT apply for that particular job in the first place.
Your beliefs does not entitle you to oppress or disrespect women. Not even if they hold the same beliefs as you do.
A religious congregation is a business. They should pay taxes just like everybody else.
If your moral code comes from a book written by some desert dwelling, goat herding nomads between 1400 and 2000 years ago, you have no authority on what is morally acceptable in the 21st century. Go live in a cave somewhere.

Amon Amarth released their most recent album, Deceiver of the Gods, in 2013, reaching their highest Billboard Chart position yet by hitting No. 19.