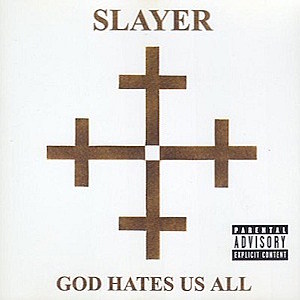 When Slayer released their eighth studio album God Hates Us All on Sept. 11, 2001, the band, like all of us, had no idea of the horrific events that would happen that day. And while the title of that album may have been very fitting at the time of the 9/11 tragedy, God Hates Us All was a merciless attack on religion, complacency and conformity that stands as one of the band’s most vicious, unrepentant releases to date.

The unrelenting barrage of the leadoff track “Disciple,” with its screamed chorus “God hates us all,” is indicative of the astonished and hate-filled reaction most of the world had to the events of 9/11. Viewed outside of the context of its release, God Hates Us All is a bludgeoning return to form following the underwhelming 1998 album Diabolus in Musica. Some critics even called it Slayer’s most inspired offering since 1990’s Seasons in the Abyss.

One reason the record impacts with so much urgency and energy is because the band worked on it for more than a year, and during that time they kept getting interrupted by touring commitments. Guitarists and songwriters Jeff Hanneman and Kerry King started writing songs for the album that became God Hates Us All in the spring of 1999. Their first major diversion was Ozzfest 1999, then came Tattoo the Earth.

“I was fed up with touring at that point and I really wanted to do another record,” Hanneman told me in 2009. “A lot of s–t built up inside of me and I wanted to get it all out with something really heavy.”

In 2000, when Slayer were ready to start recording, producer Rick Rubin told them he didn’t want to work on another violent, aggressive album and suggested the band track the record with producer Matt Hyde. The band tried him out on the song “Bloodline,” which appeared in the film Dracula 2000. The collaboration went well and Slayer and Hyde entered Bryan Adams’ The Warehouse Studio in Vancouver, British Columbia, in spring 2001.

“There was definitely no love lost between us and Rick,” King said. “We didn’t want to work with him again. We wanted a change. And when we tried working with Matt [Hyde] it seemed to go okay, so we did the record with him.”

King wrote seven of the songs on the album, including the ferocious “Payback” ( which featured the lyrics “For my own peace of mind I’m going to/ Tear your f—ing eyes out, rip your f—ing flesh off/ beat you till you’re just a f—ing lifeless carcass”). Hanneman wrote four tunes and the pair collaborated on “Bloodline.” King wrote lyrics for nine of the songs and Hanneman and Tom Araya wrote the rest.

“When I work with Jeff we tend to be pretty much on the same page,” Araya said. “Kerry likes doing everything himself so when he writes lyrics, that’s it. That’s what I’m going to sing. But with Jeff, he’s pretty open to my ideas. He does lyrics as well, and I’ll look at what he has and put my own thoughts in there and it will end up being a real collaboration.”

Soon after entering the studio, Slayer drummer Paul Bostaph tracked his drums. Then, Slayer recorded guitars, bass and vocals. “The sessions went smooth,” Araya said. “I really screamed a lot, maybe more than usual, but it seemed to fit the songs. Looking back at it later I kind of felt some of it was screaming for the sake of screaming, but no one else seemed to mind.”

Regarding the brutality of lyrics like, “I keep the bible in a pool of blood so that none of its lies can affect me” (“New Faith”) and “You make me want to slit my own f—ing throat just so I’ll be rid of you” (“Exile”), King shrugged: “It’s Slayer, dude. It’s supposed to be brutal. If it didn’t piss some people off I think we wouldn’t be doing our job. I’m the first to admit Slayer’s not for everybody. If you don’t f—in’ like it don’t f—in’ listen to it.”

Once Slayer finished recording God Hates Us All they headed back on tour. The day before 9/11, the band was home in L.A. Unswayed by the fear of terrorism and the hesitance of many musicians to use commercial airlines, Slayer started touring for the album Sept. 18 in Leuven, Belgium. The band returned to the U.S. to play shows that began Oct. 29 in New Orleans.

Bostaph suffered an elbow injury in late 2001, prompting him to quit Slayer on Dec. 7, after nine years in the band. “Paul did a fantastic job, but he told us he was having tendonitis in his elbow and he couldn’t play our stuff anymore because it was too fast,” King said. “The next thing I knew, he was playing in Testament and Exodus. I just thought that was weird because we got along and everything when he was in the band and we never had a falling out. He was out after the first part of the God Hates Us All tour, and we were up for a big, giant cycle. So Jeff brought up the idea of playing with Dave [Lombardo] again, and I said, ‘Well, f—, if you’re into it, I’ll give it a whirl.’

For founding drummer Lombardo, who had left Slayer in 1992, returning to his roots was a natural evolution. So when the opportunity presented itself he jumped back into the fire. “Almost 10 years had passed since I had left, and I was excited and wanted to do it,” he said. “But I was also like, ‘Wait, what are the personalities like? Am I gonna get along with them?’ But as soon as we got back together everything from the past was water under the bridge. It was like, ‘You guys did your own thing, I did my own thing. We both proved to ourselves we could survive without each other. Now let’s go out and destroy.’”

Lombardo played the rest of the God Hates Us All tour, then worked with the band on the albums Christ Illusion and World Painted Blood. He parted ways with Slayer in 2013 and was again replaced by Bostaph.