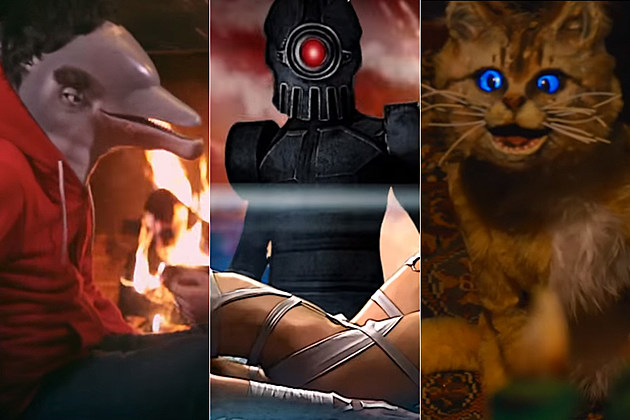 It feels like metal videos are starting to get better and better, forever attempting to reclaim the halcyon time where the medium dominated the cultural landscape and skyrocketed band popularity. While you may not see metal videos on TV anymore, it’s great to see format has survived through all of these years. Music videos can serve as a litmus test of a band’s true creativity, extending beyond the musical realm.

While dozens of bands played in empty warehouses, some took the extra effort to craft immersive experiences for fans to gain a better sense of the music or sometimes just for pure, joyous entertainment. Here, we’ve got a well-balanced mixed bag of strange, through-provoking, funny and emotional videos so watch with us as we count down the 10 Best Metal Videos of 2015.

If this was a list counting down the strangest music videos of the year, Lindemann’s NSFW video for “Fish On” would have bookended the other side of this list. Till Lindemann and Peter Tagtgren ride horses to chase down naked women using fishing nets. They are forced to ride bicycles to power the warehouse the band is playing in. One woman escapes and finds a knife, setting everyone free as they murder the creatures. We told you it was strange.

The Devil Wears Prada made an immersive video for “Planet A.” Telling the story of the curious traveler Elizabath, clips are flashed between her and the band as her story unfolds. Taking off into space, a catastrophe occcurs as her shuttle wasn’t fit to fly. The video is visually stunning with synchronized shots adding to the song’s atmosphere.

“Killpop” comes off Slipknot’s 2014 release .5: The Gray Chapter and is one of the band’s most somber songs. The video wanders around in the same haze, conflicted with ethereal hopelessness and lashed out rage. Twins dressed in latex dance around with painted faces as Corey Taylor barks at them, though from a different dimensional plane, invisible to the two women. At the end, one of the girls lays motionless in the other’s arms as the masked frontman screams “die and f-king love me!“

Behemoth are a band that embraces the visual sense just as much as the aural one, taking time to carefully craft elaborate stage designs and top-notch music videos. “The Satanist” comes off the band’s 2014 effort of the same name. but was released this year, and follows a paranoid, gaunt woman around town. She runs through crowds, scraping elbows with faceless people. As she falls deeper into a state of abandon, she is suddenly ignited by the Black Flame, lifting her spirits as Nergal exclaims, “I am the great rebellion!“

Who would expect anything other than mass bloodshed in a Slayer video? “Repentless” takes place in a prison where a riot occurs, sending men in orange jumpsuits down corridors, slashing corrections officers with knives. Blood spurts in every direction as officers with riot shields form a barricade in front of the band who is playing outside. Oh, did we forget to mention there’s a decapitation?

If only we were so lucky as kids… Ghost’s video for “Cirice” features a mini version of the Satanic cult performing at an elementary school. Lil’ Papa Emeritus professes his profound lyrics to a mostly shocked audience, but is luckily able to convert at least one willing follower in a young girl. Playing off Ghost’s deep love of classic horror, they took a Dario Argento-like approach, giving “Cirice” an eerie feel similar to that of Susperia.

Iron Maiden paid homage to three decades of video games as their undead mascot Eddie traverses through different levels collecting hearts in the video for “Speed of Light.” The first level is a tribute to the original Donkey Kong with Eddie serving as Mario. He is then warped to a sidescrolling level, a fight with the Devil Mortal Kombat style and finally a first person shooter. After gathering a heart from each level, he finds he needs a fourth to finish his task. Eddie rips his own heart to complete the set and the game is over.

Intronaut spared no comedic expense for “Fast Worms.” Who can’t appreciate a pot-smoking, booze-chugging half-man, half dolphin trying his best to fit in with our society. Spliced with the Intronaut guys performing on very non-metal instruments, “Fast Worms” tells a love story following the dolphin’s violent ejection from a bar. But do we get a happy ending? It depends on your interpretation.

The animated video for Torche’s “Annihilation Affair” proves why music videos are still important. The band clearly have some apprehensions about our addiction to technology and the possible rise and take over by machines. As robots destroy the landscape, they happen upon a woman wrapped in white cloth tatters, not unlike Leeloo from the movie The Fifth Element. They free her from her glass confines and she dies upon being exposed to the harsh atmosphere.

“Asleep in the Deep”

Mastodon are truly in a league of their own, not only creating music that beckons labeling them as their own genre, but crafting brilliant music videos like “Asleep in the Deep.” The video was released this year, but the song comes off the band’s 2014 record, Once More ‘Round the Sun. In this video, a cat leaves home and stumbles upon a weird, blacklit world full of cute little demon creatures. After drinking from a saucer, the furry feline undergoes a psychedelic transformation and has all sorts of hallucinations. The pacing of the video complements the trance-like song, resulting in the Best Metal Video of 2015.