Veteran rockers Prong are poised to release their tenth studio album, X – No Absolutes, on Feb. 6, 2016. The uncompromising lone constant in the band, Tommy Victor, has assembled 12 songs that will make up the new record, adding to Prong’s increasingly steady output over the last few years.

Releasing a trailer to tease the new album, the video above features a portion of the album’s opening track, “Ultimate Authority.” The follow-up to Ruining Lives, the band’s 2014’s studio effort, has Victor pumped up as he exclaims, “Prong is excited about the upcoming release of our tenth studio release of new material, Prong X – No Absolutes. It seems as though our recent records keep getting better and this new recording definitely appears to be a testament to this.” 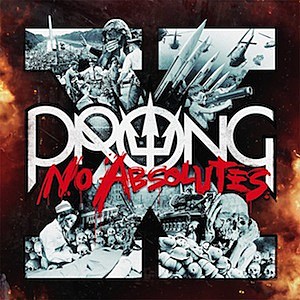 The founding frontman didn’t stop there, adding, “Prong has maintained aggression while tackling the challenge of creating classic songs and anthems in the past, but we have gone even a step further with this mentality on No Absolutes. Here you will find a collection of riff intensified crushers, furious barn burners, and fist pumping sing-a-longs.”

Victor promises the album will show improvement in all areas, from technical prowess to inspiring thought from every lyric as the band continues to one-up themselves. Expanding on this, he said, “Our themes on this record will certainly inspire some thought. Whether it be a dose of self discovery, a dialogue of a personal challenge or a viscous finger pointing at what we believe to be a falsehood, those attentive to messages and lyrics in general will be supplied. And we feel they will be compelled to shout aloud with, mimic a riff, sing along or cry out in pain with Prong X – No Absolutes!”

To pre-order the album, out Feb. 6 on SPV/Steamhammer, click here.

In support of X – No Absolutes, Prong will be on the road touring Europe in March of 2016 before embarking on a lengthy North American run from the end of April through the beginning of June. For a full list of dates, visit the band’s website.

Songs From the Black Hole, Prong’s cover album, was released earlier this year in March. The record contained covers of songs from some of the band’s biggest influences and favorites, including the Sisters of Mercy, Fugazi, Black Flag and Killing Joke.

Watch the Video for Prong’s ‘Remove, Separate Self’