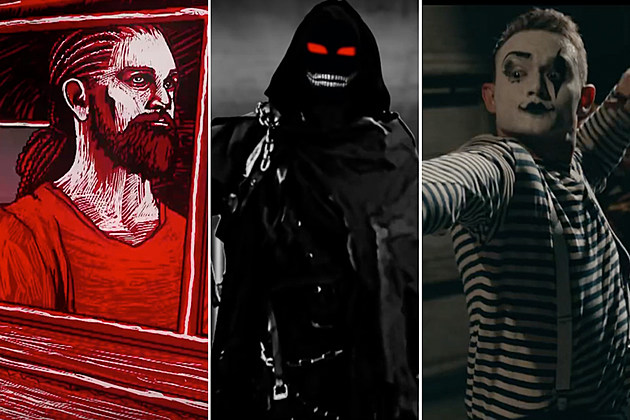 The music video form is alive and well in 2015. Just take a look at our staff picks for the 10 Best Rock Videos of 2015 to see what we mean.

Not only do each of the clips feature great rock songs, but they also use the music video as an art form. You’ve got some very artistic clips using animation or claymation to tell their story. There’s also videos that have a sense of humor or darker dramatic elements that entertain while telling their story. And we’ve got videos that touch on deeper issues like nuclear war, media bias, profiling in police shootings and juicing in sports.

The Darkness kicked off their support of the Last of Our Kind album with the “Barbarian” video, an eye-catching clip that told the tale of Edmund the Martyr, cut down by Ivar the Boneless. The animated clip is like a comic book come to life, with its panels delivering the story with visual glory. Loudwire’s readers agreed, with the video reaching our Battle Royale Video Countdown Hall of Fame earlier this year.

Primus delivered the super sweet “Candyman” video late in 2015 and this psychedelic clip, much like the song, takes its influence from Willy Wonka and the Chocolate Factory. Using claymation, directors Ivan Landau, Edgar Alvarez and Webster Colcord deliver a stunning visual tale, plopping the viewer right down into a candy-filled wonderland.

Chris Cornell not only belts a pretty solid tune, but he gets to show off his acting chops, as well. In the “Nearly Forgot My Broken Heart” video, the singer is a cowboy, sharing a jail cell with a guitar playing Eric Roberts while they both wait to hang. It’s a pretty dire fate awaiting Cornell in this cinematically shot video, but there’s a twist in store before Cornell drops from the gallows. Watch and enjoy.

Major props go out to Future User’s Tim Commerford, who went to great lengths for his art in the “Mountain Lion” video. Watch as he skateboards through Los Angeles, shoots up with steroids and later sets himself ablaze in a “don’t-try-this-at-home” finale. Also, look for disgraced cyclist Lance Armstrong making a cameo in the clip.

Bring Me the Horizon

Bring Me the Horizon went the cinematic route, telling a tale that we wish played more of like a TV series than a 7-minute plus video. The “True Friends” video centers on a police investigator increasingly haunted by a tragic incidence involving a young woman. Who is playing the mind games? You’ll have to watch as it all plays out. The band’s own Oli Sykes directed the video, which hinges on the tormented portrayal by actor Steve Oram.

“Nobody Praying for Me”

Seether offered one of the more thought provoking videos of the year in “Nobody Praying for Me.” The interactive video allowed viewers to follow the story of a police shooting from the viewpoints of multiple subjects. In total, we see the days of the officer involved, a bystander and the youth of color shot in the incident as well as news reports delivered by media outlets with different slants. In the end, the idea of the Sherif Higazy-directed video was to remind viewers not to rush to judgment based on pre-conceived notions and to fully investigate before rendering a conclusion.

“The Mephistopheles of Los Angeles”

Marilyn Manson as a street healer? That’s what we get in “The Mephistopheles of Los Angeles” video. The stylish video opens with a narration by The Wire and Boardwalk Empire actor Michael K. Williams, setting up the story we’re about to see. Manson has his group of disciples. Is he what he appears to be or something more sinister? Watch this visually intriguing clip.

Would you like to play a game of thermonuclear war? No, this isn’t War Games, but the threat is very real in Avatar’s “Vultures Fly” video. As we see in this animated clip, a two groups of what appear to be brainwashed workers go about their day, doing as their told. But unfortunately that means sending the world into a nuclear mess as they push the buttons to ensure mutual destruction. This animated video reached the Battle Royale Video Countdown Hall of Fame and recently was voted by Loudwire readers as the Rock Video of the Year.

Disturbed made quite the impression upon their return, unleashing their single “The Vengeful One” with a powerful and impactful video. Directed by Phil Mucci, the clip finds longtime Disturbed mascot “The Guy” riding into town and infiltrating a news network led by robotic newscasters that have been brainwashing the minds of viewers. It’s not long before “The Guy” issues his brand of mayhem and justice, attempting to break the spell that the viewing world is under.

Three words — clown fight club! Whether you find clowns funny or scary, there’s something people can gravitate toward in the Offspring’s clever clip for “Coming for You.” What initially appears to be the typical bungling clowns doing pratfalls for laughs turns into something more sinister as these clowns are out for blood. Bit by bit, the comical battle turns more gruesome and bloody, that is until a mime enters the fray! It’s bloody good fun and immediately made a mark upon its debut. The Offspring’s “Coming for You” is our Top Rock Video of 2015.