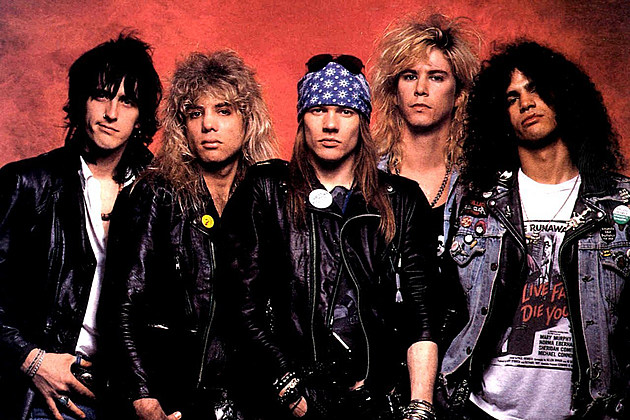 During their first era, Guns N’ Roses were a fixture on MTV and the music video network’s backing of the band’s artistic vision helped the group on their trajectory to the top of the rock world.

As the band continued their rise, their videos proved to more elaborate. They even managed to tie several of their clips together into what amounts to a conceptual trilogy. As time has passed, Guns N’ Roses’ visual representations have almost become as well known as their songs.

With that in mind, we took a look back at some of the band’s best clips. Join us in reflecting on the 10 Best Guns N’ Roses Videos below.

Part of what made the early era of Guns N’ Roses so great was the pure unabashed energy and the ability to fully embrace their performance. You get a glimpse of that in the band’s “Garden of Eden” video, as Axl Rose mugs for the camera’s fisheye lens while his bandmates rock and stomp around behind him. It’s a simplistic video idea but one that works incredibly well.

During the ‘Use Your Illusion’ era, there was no hotter ticket than to see a Guns N’ Roses show. One look at the band’s “Live and Let Die” video and you can see why. The frenzied performance of Axl Rose combined with one of the baddest bands in the land made for an infinitely watchable experience.

Part of the band’s “trilogy,” “Estranged” opens with the definition of the word “illusion” as a form of deception. In one of the more cinematic videos in the band’s canon, a SWAT team crashes in on Axl Rose’s home as the singer lays balled up in a barely conscious state, somewhere between reality and a dream state where dolphins swim along the Sunset Strip. What does it all mean? Watch and come up with your own interpretation.

Life on the road can be a lonely place, as expressed in the Guns N’ Roses video for “Patience.” Axl Rose whistles and wistfully sings about a faraway love while viewers watch a series of hotel rooms, corridors and lobbies. Never has room service seemed like such a solitary action. The clip paints a mood fitting of the song and stands out as one of their better videos.

There are no special effects or high concepts here, but there’s something iconic about the video for “Sweet Child O’ Mine.” Whether its the leather-jacketed, top hat wearing Slash noodling away during the song’s opening moments, the bandana-sporting Axl or Duff McKagan in his CBGB shirt, this black-and-white, grainy looking video is THE look we most often associate with the band. It’s primarily a performance clip of the band rehearsing while various crew and entourage members hang out. While it’s a fly on the wall feel, we’re pretty jealous of those who just got to hang out during even the pre-show moments to witness the brilliance.

Guns N’ Roses’ rise to the top was pretty meteoric and you get the feel of that in their “Paradise City” video. In just a short time, the band found their way to playing stadiums and in the “Paradise City” clip you see the expanse of the empty venue during soundcheck as the band prepares to entertain, some of the backstage moments and the crowd beginning to flow in for what proved to be an electrifying performance.

As we’ve seen over time, it’s hard to make a video for a soundtrack song that incorporates footage from the film that doesn’t seem cliche. But for their song “You Could Be Mine,” which turns up in the Arnold Schwarzenegger blockbuster Terminator 2: Judgment Day, the band has fun with it. Part performance piece, part movie promo, “You Could Be Mine” scores with Schwarzenegger willing to shoot scenes to tie it all together as the Terminator weaves his way through a crowd ready to target the band.

As part of the Guns N’ Roses video trilogy, Axl Rose finds himself in pretty dire straits again in the “Don’t Cry” video. Scenes of a bitter spat involving a gun, shots of him attempting to stay afloat while being pulled under water and helicopters with spotlights hovering oh so close as the band performs above a tall building set the tone. Themes of jealousy, death and relationships gone bad also permeate the clip, with the video ending with Axl looking upward from a grave that bares his name and a baby emerging from a bath. As Axl writes at the end of the video, “There’s a lot goin’ on.”

Our first real glimpse of Axl Rose was hopping off a bus and entering “the jungle,” so to speak. “Welcome to the Jungle” found the singer being introduced to a whole new world, one filled with “fun and games.” Quick hitting shots meant to portray society’s fascination with sex, war and violence as played out on TV, while visuals of the band’s raucous performance fill out the rest of the clip. It’s a powerful first visual statement and one that has stood the test of time.

If you’re confused by the “Don’t Cry” and “Estranged” videos, perhaps “November Rain” can help tie it together. The epic clip centers on the wedded bliss of a love fulfilled followed by the agony of a love lost. We also get a full-on backing symphony, some pretty powerful visuals of Slash rocking a guitar in a dusty church courtyard, a somber funeral procession and Axl Rose waking in a sweaty panic.