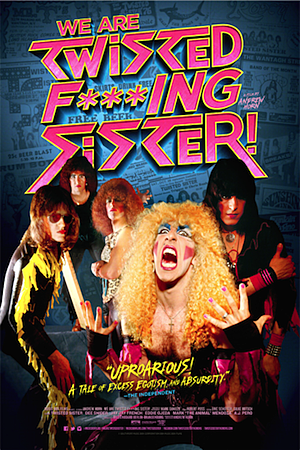 Glam rock heroes Twisted Sister spent an entire decade packing bars in New York before their eventual rise to the top. The often unsung efforts of a band determined to make it have been documented in the film We Are Twisted F***ing Sister!, spanning over two hours detailing the band’s perseverance. After premiering at independent film festivals, the documentary is now set for a limited theatrical release ahead of a Feb. 23 consumer release date.

We Are Twisted F***ing Sister! will be screening at Cinefamily Theaters in Los Angeles with two showings on Feb. 15. The same day the Bryant Bowl in Minneapolis will also get a screening. On Feb. 17, Portland, Maine’s Space Gallery will air the film. On Feb. 19, New York City’s Cinema Village and Seattle’s Grand Illusions will begin a one week run of the film, while Pittsburgh’s Hollywood Theater will screen it between Feb. 19-22. And finally, Chicago’s Music Box Theater will show the movie on Feb. 22.

Directed by Andrew Horn (East Side Story, The Nomi Song, Doomed Love, The Big Blue), the film is the first to focus on Twisted Sister’s pre-fame days and DIY ethos and subsequent struggles. Commenting on the process, Horn stated, “I realized as I was working on the film, that it was really very much a story of how a band becomes a band. They are truly unique in that their overnight success actually took 10 years, so you really get to experience everything Twisted Sister went through to do it. I have to say, I don’t think I’ve ever experienced any group of musicians as ferocious…or as funny.”

As a bar band staple, Twisted Sister would play four to five nights a week and ran through multiple sets each night as they played to increasingly ravenous crowds. While record labels refused to touch them despite their live reputation, the band soldiered on and refused to give up. As a bar band, they mostly played cover songs and honed their songwriting skills over the years as frontman Dee Snider eventually took over the writing process and helped the band find success as an established and original act.

Twisted Sister will be embarking on their farewell tour this year following the death of drummer A.J. Pero in 2015. The skinsman passed away while on tour with Adrenaline Mob due to a massive stroke and massive heart attack. Snider has remained steadfast that Twisted Sister exists only as himself, Jay Jay French, Mark ‘The Animal’ Mendoza and Pero even though they have had multiple lineup changes in the past. For this reason, it will be the end of the band as drum legend and fellow New York native Mike Portnoy will man the sticks as the band bows out.

We Are Twisted F***ing Sister! Trailer