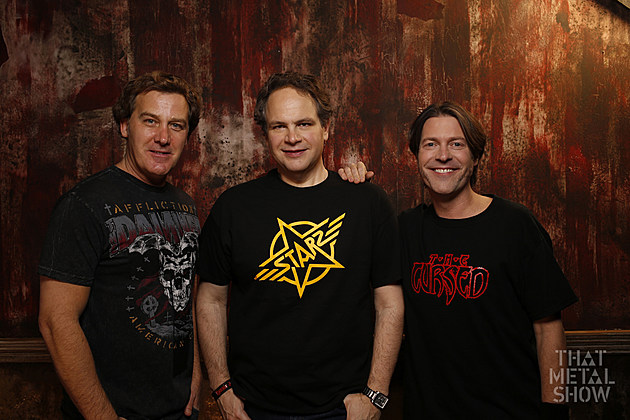 For 14 seasons, That Metal Show has carried the metal torch on VH1 Classic, but the sad news has been revealed that VH1 has decided not to bring the show back for another year.

In a posting on co-host Eddie Trunk‘s website that is also credited to co-hosts Jim Florentine and Don Jamieson, it’s revealed that the network has decided to discontinue making new episodes. Though there have been 14 seasons, the show spanned eight years and roughly 125 episodes. You can read the full statement below.

A message to the loyal fans of That Metal Show from Eddie, Jim & Don:
We are sorry to report that VH1 Classic will not continue to make any new episodes of That Metal Show. It has been an incredible run of eight years, roughly 125 episodes and some really cool specials. The global response to TMS has been simply amazing, and we will be eternally grateful for the support from the rock and metal fans that have showed us so much love. We truly would have never made it as long as we did without you! A huge thanks also to the great crews we had over the years both in NYC and Los Angeles, to our producer Jeff Baumgardner, and to all the executives at VH1. And finally, thanks to the hundreds of artists that joined us on our set, had fun with us, shared their stories and many, many laughs. From the biggest names in rock history, to the up-and-comers: we thank you all for being a part of it.
Of course we very much want to keep That Metal Show alive, and with the blessing of VH1 Classic, we’ve got the keys to the show and are currently searching for a new home. We’re not sure where we’ll land, but we hope to be back in our studio and your living rooms as soon as possible. In the meantime, keep an eye out for us on the road and come say, “Hello.”
Thank you for watching all these years, and we’ll keep you posted as soon as we have news to share.

As stated in the posting, the network did allow the guys to shop the show to other networks with their blessing. Shortly after the announcement was made, Eddie Trunk hopped on Periscope for a chat with fans.

“TV shows don’t last as long as this. We were the little show that could,” said Trunk, who later revealed the odd feeling of not having the association with VH1 Classic, a network he was with long before That Metal Show started.

Trunk revealed that it’s not as simple as the guys taking the show to another network and that there are costs to be considered and other networks have to show that interest. Fans expressed their interest in Palladia as an option, but Trunk revealed that the network was owned by VH1. However, the Mark Cuban-owned AXS was a frequently mentioned option where fans hoped it could end up. “This is where you guys as fans can go old school and help us out,” said Trunk, stating that a show of support to networks via social networks could help in keeping the show alive.