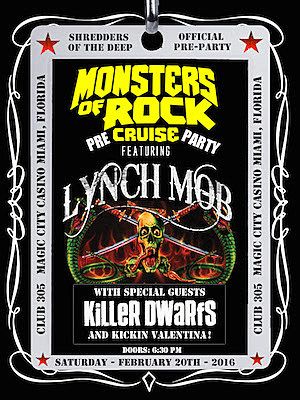 If four days of rocking on the high seas just isn’t enough and you’ve got the weekend wide open before setting sail, Monsters of Rock might have you penciling in two days of headbanging! Lynch Mob will be headlining a Saturday, Feb. 20 show as the Pre-Cruise Party with a Shredder’s Ball coming the next day featuring Winger, Saigon Kick and the all-star Rush tribute band, Hurry. 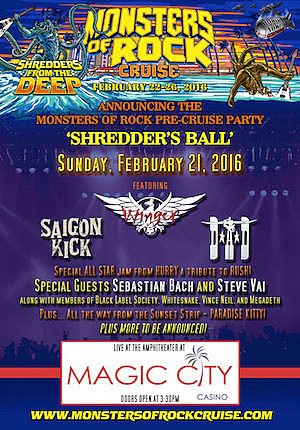 The two shows will be complimentary for those who already have their ticket aboard the ship for the Shredders From the Deep clinics. If you haven’t reserved your spot yet for the cruise, cabins are still available starting at $499. For ticket information visit the Monsters of Rock cruise website.

Not only will bands be performing on the ship, but axemen like Vai, George Lynch (Lynch Mob) and Gus G (Firewind, Ozzy Osbourne) will be providing free guitar clinics for those onboard, ensuring one of the more unique experiences in the ever-expanding world of heavy metal cruises. For a full list of festivals, check out our 2016 Guide to Rock + Metal Festivals.