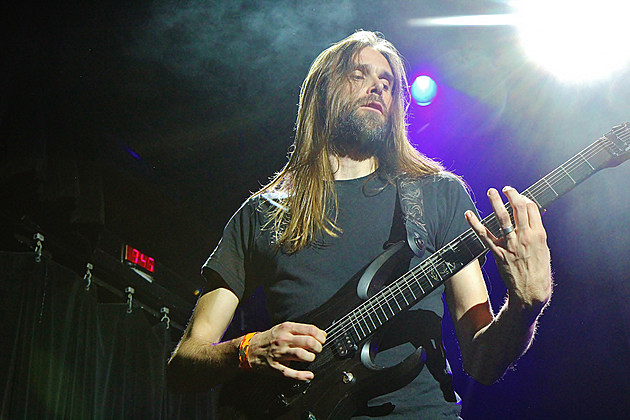 TesseracT guitarist James Monteith was the guest on Full Metal Jackie’s weekend radio show. The musician spoke about the band’s ‘Polaris’ album, the return of vocalist Daniel Tompkins and more. Check out the chat below.

Thank you so much for being on the show. TesseracT has been out there doing a lot of touring. There’s a great new album out there, as well. James — what is the intellectualism of TesseracT’s music and what do the lyrical concepts reflect about you and the rest of the band?

I don’t know really, I think quite a lot of it I guess is that we’re a bunch of nerds and we’re into really nerdy things, massive fans of science and a kind of crazy stuff. I guess the whole band name comes from, it basically means a four dimensional cube or a cube in a four dimensional space, and then lots of everything else coming out starts with the fascination with some science, with the wide world if you’d like.

Musically, sometimes what you don’t play is crucial to a song. Why is restraint such an important part of Polaris?

I think it has generally always been one of our key things we’ve wanted to do from the beginning. I remember kind of coming out at some of the same times as some of the other very technical bands with some of the same kinds of things. I think, I mean I love ’80s shredders and the kind of people who can play faster than I can or anything. Also I think a really good song, a good melody comes from simplicity and yeah, I think basically if you hold back and really make those few notes you play count I think it could be more effective than seeing how many notes you can play in a millisecond.

Daniel Tompkins rejoined the band last year. How did three years apart reinforce his place in the band?

It was quite amazing to be honest. When he rejoined we played one rehearsal before our debut show with him, which was the following day, and basically when he walked back in it felt like no time had passed at all. We felt very strong as a unit immediately. I think one thing that had happened over that period of time is we all got a bit better at what we were doing so, like Dan had definitely developed his vocals power and his range and his techniques and that was notable. He came back way stronger than before and he commented on the rest of us was like wow this band sounds like a new band. So I think us staying away from each other and proving and coming back together but with the same vibe that we had three years prior, basically got us off to a really strong start.

The new album, Polaris, is distinct individual songs rather than a single linear piece of music like you guys have done in the past. What prompted that creative shift?

I don’t think anything prompted it really like all the previous records everything happened sort of naturally, sort of from the initial rift to the layers that were put together and then vocal design and the range. The process has always been exactly the same, was exactly the same on this record as on previous on the previous record. I think maybe there is like a subconscious urge to do something a little bit more song based. I don’t know. But in all honesty it just kind of turned out the way it turned out with no preconceived ideas before hand.

In what ways are you an even better band as a direct result of the experience of making this latest album?

I think the new record is a little bit more dynamic than the previous record. There is a lot I guess going back to the what you don’t play thing you mentioned, it’s even more important on this record. It’s basically being restrained, being controlled and making sure that everything that you play counts and sounds good. It’s more disciplined I think to play the sensitive stuff so I think yea touring this record has definitely helped us mature as players.

What can we expect from TesseracT in 2016?

Well, we are kicking off with more touring. We’ll be focusing on Europe and the European festivals. Then after that, we’re hoping to return to the States again. We haven’t actually figured that out yet, we had one offer that nearly worked out but it clashed with something else. That didn’t happen. Expect to see a lot more touring from us in the next year.

Thanks for taking the time, good luck with all that’s to come.

Thank you very much.

Thanks to TesseracT’s James Monteith for the interview. You can pick up the Polaris album via Amazon and iTunes. And as James mentioned, the band will be touring Europe in early 2016. See their dates here. Find out where you can hear Full Metal Jackie’s weekend show at this location.