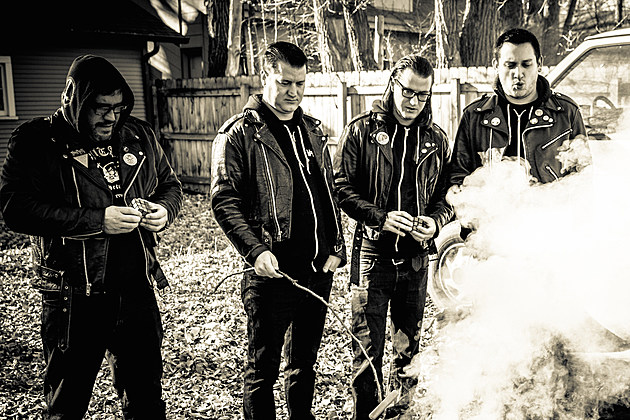 Sad news to report as punk rock drummer Brandon Carlisle of Teenage Bottlerocket is set to be taken off of life support after being found unresponsive in his apartment earlier this week on Nov. 3. When paramedics arrived, they determined his heart was no longer beating and he was rushed to the hospital in a coma. Since then, doctors have worked tirelessly to save the drummer, having started his heart three times since first treating him.

The band released a statement regarding the situation on their Instagram page, letting fans know that an MRI revealed “he is no longer with us” and that “his family and loved ones are with him as they prepare to take him off life support and let him gently move on.” Having launched a campaign to raise donations to support Carlisle, the band is touched by what their fans have been able to do. Read the entire post below.

It is with the heaviest hearts that we have to report our beloved drummer Brandon didn’t make it. The doctors did everything they could to save him, but the MRI showed he is no longer with us. His family and loved ones are with him as they prepare to take him off life support and let him gently move on. Seeing so many people from all over the world come together in support has been amazing and we know Brandon could feel how much he was really loved. Brandon lived his life with his whole heart. He loved music, and he loved people. He always made it a point to let everyone know how much they meant to him, and to take time to make new friends. Anyone who was lucky enough to spend even a minute with the guy knows what a blessing he was to this earth. So with that love in our hearts, we carry him with us as we say goodbye. To the best drummer, the kindest soul and our brother and best friend, you will be in our hearts always. Rest in Peace Brandon, we all love you so much.

A photo posted by Teenage Bottlerocket (@teenagebottlerocket) on Nov 6, 2015 at 9:31pm PST

A day after Carlisle was found in his apartment, Teenage Bottlerocket released a statement on their Facebook page stating:

Please keep Brandon in your thoughts and prayers as he fights for his life. Here’s the statement from Ray: Hi friends and family. This is a tough one. Here goes. My brother Brandon Carlisle is in a coma. His roommate found him yesterday around 11 am and he was unresponsive. The paramedics showed up at his house shortly after and his heart wasn’t beating. They got it going and it gave out again in the ambulance. They got his heart started again and it stopped beating in the icu unit where the doctors were able to get his heart going again a third time. The scary part is the swelling to Brandon’s brain due to lack of oxygen and blood flow. His body temperature was 88 degrees when he arrived at the icu. I’m pretty sure that means my brother was without oxygen for quite a long time. He is currently in a coma and the doctors are keeping him at about 93 degrees. They will start to bring him back up to a normal temperature for the next 12-16 hours. Then they will ween him off of his sedatives and the neurologists will be able to determine whether or not Brandon is still with us. All prayers and thoughts for my brother are greatly appreciated. I know Brandon didn’t want this to happen. He’s tough as nails and we are hoping for the best. Looks like we need a miracle. Love to all.

Brandon was one of two remaining founding members of the punk act, the other being his twin brother Ray, who plays guitar and fronts the band. Teenage Bottlerocket have released six albums, the most recent being Tales From Wyoming, which came out on March 31 of this year on Rise Records.

Loudwire extends its deepest condolences to Teenage Bottlerocket and the Carlisle family as they go through this extremely difficult time. Fans looking to make a donation can do so here.