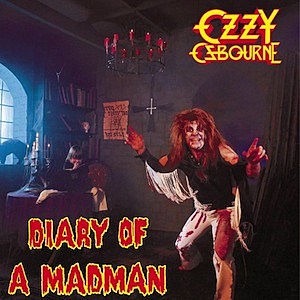 Proving the success of his first solo album, Blizzard of Ozz, was no fluke, Ozzy Osbourne reestablished himself as the wildman of commercial metal with Diary of a Madman, which came out on Nov. 7, 1981. Following a similar structure to that of Blizzard, Osbourne skillfully combined storming fist-in-the-air rockers like “Over the Mountain,” “Flying High Again” and “S.A.T.O.” with more subtle and dynamic songs such as “You Can’t Kill Rock and Roll” and the heartrending power ballad “Tonight.” The only thing missing was a classical guitar instrumental, but guitar god Randy Rhoads didn’t need a solo spotlight since he shined bright as the sun all over the record.

Like many albums Osbourne was involved in during the years he was a veritable rock ‘n’ roll maniac, Diary of a Madman was accompanied by controversy and legal wrangles. Bassist Bob Daisley allegedly wrote much of the music and most of the lyrics on the album and drummer Lee Kerslake claimed he came up with the main ideas for “Flying High Again” and “Over The Mountain,” yet neither the bassist nor drummer received songwriting or performance credits (the liner notes credited bassist Rudy Sarzo and drummer Tommy Aldridge). And when the album was reissued in 2002, the original tracks were completely erased and re-recorded by bassist Robert Trujillo (Suicidal Tendencies, Metallica) and drummer Mike Bordin (Faith No More).

To Ozzy’s adoring fans, it didn’t matter who the rhythm section featured. It was all about Ozzy’s iconoclastic voice and Rhoads’ exceptional neo-classical guitar playing, and Diary of a Madman was another amazing roller coaster ride full of musical depth, sharp songwriting and top-notch performances.

Like Blizzard of Ozz, Diary of a Madman was recorded quickly in an effort to get Ozzy back on the road. Most of the songs were written throughout 1980 and by February, 1981 the band was at Ridge Farm Studios in Rusper, England with producer Max Norman. In less than a month the album was complete. Tragically, the album would be the last studio album to feature Rhoads, who died in a plane crash on March 19, 1982.

“Randy felt a bit rushed for Diary of a Madman,” his brother Kelle Rhoads told me in 2011. “He wished he had a little bit more time; he was a perfectionist. Of course, what’s on there is pretty good, but he had a little more time to work on the first record.”

For most bands in the ‘80s, a month in the studio was barely enough time to set up the mikes and tweak the board levels, let along track the songs, but Norman, who cut his teeth on Blizzard of Ozz, had vision, drive and the skill to capture the band’s performances quickly and spontaneously. Diary of a Madman is a crisp, polished recording in which every instrument is clearly audible and the lows and highs are perfectly balanced. For the self-deprecating Osbourne, his singing was the weakest element of the record.

“Randy was the highlight of that album and everything he did,” he told me in 1997. “He could do anything and I was very lucky to have him. His talent made me sound better. I don’t especially like the sound of my voice and I don’t know why people keep wanting me to sing and perform.”

Diary of a Madman entered the Billboard album chart at No. 16, and the album features three singles that landed on the Mainstream Rock Chart; “Flying High Again” hit No. 2, “Over The Mountain” peaked at No. 38 and “You Can’t Kill Rock and Roll” made it to No. 41. On May 10, 1982, Diary of a Madman was certified platinum by the RIAA and on Oct. 26, 1994, it went triple platinum.

In addition to its 2002 reissue, the album was released in a deluxe 30th Anniversary Edition in 2011 with the original bass and drum parts restored. The release also featured a bonus live disc recorded during the second leg of the Blizzard of Ozz tour. Highlights include early performances of “Flying High Again” and “Believer” as well as the Black Sabbath songs “Iron Man,” “Children of the Grave” and “Paranoid.”

You Think You Know Ozzy Osbourne?

Ozzy Returns to the Alamo 33 Years After Public Urination Incident