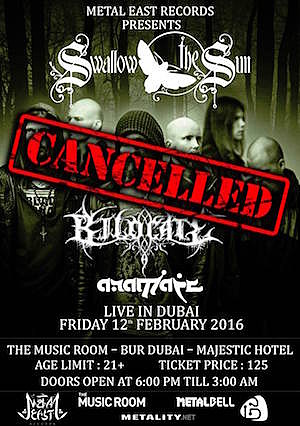 Finnish metallers Swallow the Sun were set to perform a rare show in Dubai on Feb. 12, but the gig has been canceled after the band was accused of “promoting devil-worshiping.”

The city of Dubai is extremely religious and conservative, so worry based on “Satanic panic” is not surprising. In fact, Aborted’s 2015 show in Dubai was also canceled over similar reasons.

The group was set to perform in Dubai with fellow metal acts Bilocate and Aramaic. The show was put on by promoters Metal East Records, who released a statement on the gig’s cancelation. It can be read below:

Due to another complaint to the authorities, the show got rejected and we will no longer be hosting Swallow The Sun, Bilocate and Aramaic. What we know so far [is] that a competitor has actually filed this complaint mentioning the show was promoting devil-worshiping (which we all know is not the case).

The show will continue and since none of the original line up can perform, let’s fill the bill up with some local talents and celebrate never giving up on the music we love. Please contact us if you are in as a band or would like to suggest a band for this event, noting that swallow the sun members will be as a guest of honor at the venue. Stay tuned for the new line-up announcement. We apologize for the inconvenience caused to everyone, Metal East Records. All the online purchased tickets will be refunded and back to their accounts in 3-5 working days.

Swallow the Sun apologized to fans for the show cancellation:

Today we got some very very sad news. Sadly we can’t perform our music to you guys. But some of us are still coming to Dubai to meet you. I guess it’s better than nothing? We are so sorry.

-An official announcement to our fans in Dubai, UAE, and the surrounding area– Regretfully, we announce that our show…