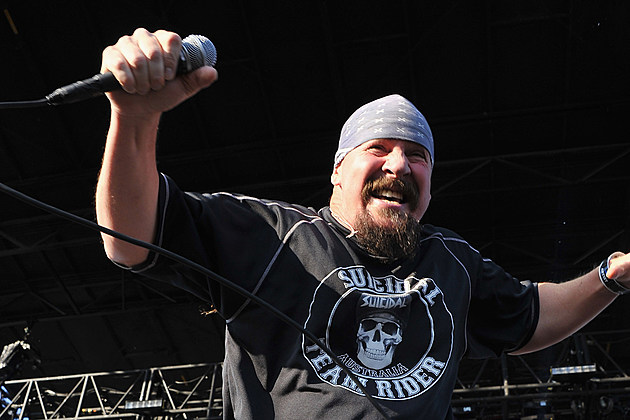 Suicidal Tendencies frontman Mike Muir was the guest on Full Metal Jackie’s weekend radio show. The singer discussed the band’s upcoming tours, his love for David Bowie and the band’s place in bridging the genres of punk and metal. Check out the chat below.

Suicidal Tendencies was one of the first bands to bridge punk and metal. What was exciting and scary about breaking that divide?

Nothing exciting about it. It was just doing what I liked and I realized it was more scary to other people, you know, people did not appreciate. It’s like the same thing in Paul Crock, it was like being an individual but when you broke it down, as long as you dress the way we do, look the way we do, say the same things we do, then you’re an individual, and I was like, “Wow. I don’t see that. It’s the hypocrisy I don’t get,” and then about what you like doing, doing your own thing, do it your own way, and not following what other people did. In metal, in the early ’80s, let’s be honest, it was a bunch of tight leather pants and a lot of guys wearing makeup and stuff like that, unfortunately, doesn’t happen anymore.

Not that there’s anything wrong with it if that’s what they want to do, but I put it this way: there’s probably a lot of people that have pictures that they’re very embarrassed of. I think music to me is a situation or something where it’s what you feel, what you like. It doesn’t matter if someone else likes it, like the analogy if you have a food and someone else says, “Oh, I hate that,” you don’t spit it out. I like it, it’s your thing. There were a lot of people that went into it, fortunately, a lot of people like the skaters were the first ones to kind of get into it and then you would see some of the metal people and some of the punkers, the ones that didn’t feel like they fit into some kind of category and stuff and just said, “hey wow, this is cool,” and liked it just for what it was rather than saying “you can’t do this,” or “you can’t do that.”

Mike, David Bowie’s passing affected musicians from all genres of music. You covered Bowie with Infectious Grooves on Suspicious Arch, what did you like most about him?

Wow. Jeez, how do you answer that? I think Jimi Hendrix was the first person that blew my mind with the guitar type of thing, and I didn’t really know at the time, I just knew that there wasn’t anything else like him. David Bowie blew my mind … with the Ziggy Stardust stuff. A lot of his stuff just made me go, “Whoa! What the hell is that?” You look at Ziggy Stardust and all of that, that’s pretty much heavy metal, the foundation of that kind of stuff. The whole way they did so many different things and didn’t worry about what was, when you at what the music was going on at the time, the dude was brilliant. I just think he was absolutely brilliant. I read some stuff about some struggles with the labels not wanting to put out records, and all this stuff. He just had his thing and he did it at a time where it would’ve been really hard to do.

I just think the guy is amazing. It’s funny because before that happened, we were talking about him, and I think that when people pass away, people always say nice things when people die. I had a conversation just about a week before, and if the question came up about a musician, like who I’d want to meet or just have lunch with, just to meet them,” I just thought, “David Bowie.” I just thought he’d seem like a super cool person and just all that stuff, and to me, it’s just a huge compliment.

Mike, you’ve got this Slipknot tour in Europe and then Megadeth here in the States. What never changes in terms of being on the road?

We fly to start off in Finland where it was -30 degrees, and that’s the big thing is the weather. It’s so cold, and we have to deal with that so it makes a big difference. We start in the Scandinavian countries, and one time we were doing a tour over there in the winter time and I woke up in the tour bus, and I was like, “Why are we in this parking lot?” And they said, “This is the freeway. Everything’s all snowed in.” And there a whole lot of different things you have to deal with. I think with the crowd and the people, obviously, you go four miles, you’re in a different country, different language, this and that.

But when it comes down to music, you get up there and for us we have a great opportunity to play our music in front of a lot of people who have never heard our music. They’ve probably seen the name, this and that, and they’re there to check it out, and we were fortunate to do some shows with them in the states and in Canada late last year, and it went really well. The Slipknot dudes are really cool and they’re crew is amazing and it was a really great situation. It was a lot of fun and we had a chance at the same thing to play in Edmonton where the Oilers used to play and the hockey thing. I got my photo with Wayne Gretzky statue out in front. You sit there and you go, “Wow. I’m really happy and stoked to be here.” Never would’ve thought that I’d be able to do something like that and so there’s a lot of opportunities.

My dad says the best thing about the world is the people and the worst thing is the people. You meet a lot of great people, and the bottom like is, people love music. They love what they love, and it’s great to find people that love the same thing that you love. `

Mike, just because a band doesn’t release an album every year, it doesn’t mean they’re not writing music. How much time do you generally spend developing song ideas?

I think it’s more different than it used to be. It used to be people would go in, they have a little schedule – here’s the tour thing, it’s all planned out. It was like, OK, we finished the tour, we have this much time off, ok we write songs, you want to be in the studio there, you want the record out right there. It was like a super duper business, it was a machine. We try to avoid that as much as possible but it was hard. Now there’s no business, so you have the irony of it, it’s like, a lot of people got into the music because they love music.

A lot of people got into music because they wanted people to love then, [laughs]. I got into it because I loved what I loved and hated what I hated. There’s an irony, as why do you need to put out music if you love it? I think for us, we’ve always said, from my first interview in Flipside. I never want it to become a job. Never let it become a job. That’s the one thing we do. As we get older, then it gets – it’s like, with Robert [Trujillo] today. I’m sure people love a Metallica record, but when you have families and all that stuff, you kind of just don’t want to be around five guys and producer or whatever and live in the studio for 20 hours a day for a long time. I think a lot of times, that in the play of music people go – we don’t have to force it. Let’s try and make it as good as possible. With the way studios are with pro tools you can spend more time, so i think a lot of times people have a tendency to take advantage of that opportunity to spend more time.

There’s not this sense of urgency. They’d rather wait until it’s perfect in general. I’m not talking about Metallica, but in general. A lot of times, people will say nah, I don’t want to rush anything out. I understand, it took us 13 years to put another record out. [laughs] I think there are a lot of people like that, where they have hundreds of songs they’ve recorded, it’ll probably never release. It’s a different world.

You’ve played with a lot of people over the course of your career. How much has working with such a wide range of musicians broadened you not only as someone who makes music, but someone who listens to it?

I think it still goes back even being an old man, I still see people and I always – my dad always says, if you see something you don’t like, don’t do it. So, there’s been a lot of people who have done a lot of things, I don’t know, just because they are in bands or what, I don’t like the way they do it so I try not to do those types of things in general. I’ve never really met “idols” or anything, but i’ve been fortunate to meet a lot of really great people. There’s a lot of people who are behind the scenes with everything that noone ever knows that i’ve been fortunate to meet, that I really respect and who are really smart people. Same thing, you meet a lot of really good people and you meet some people that are, who are very crooked.

You try to keep it about the music and keep in our own little area segregated. I’ve never been one to sit in, I just don’t have the social skills or the want. So a lot of people misinterpret that in certain ways. It comes down to I’d rather be with my kids, have nothing against it not trying to put down anybody else but, when you’re gone so much and you get up to go to the bathroom and they go “are you leaving on a plane??” you sit there and go, time is important and what’s really valuable and stuff. So, you take all those things into consideration and go I don’t really want to do shows unless I really want to do it. That’s the tours we’ve got coming up, we really want to do them. They are good opportunities, I think people appreciate that.

What can you tell us that’s coming beyond that tour?

We get to fly back from the Slipknot tour and go straight onto the Megadeth tour. We miss the first four and the last two of that tour. Then, we go to Japan for a few weeks and then hopefully take some time off. We’ll be back in Europe doing festivals in the summer, going to South America, trying to keep safe and sane. We’re very fortunate, we get opportunities to do things we never thought we would. We try and pick and choose and just don’t do things to do it, if we do something we hope to make – come off the best way possible and what we think is the best way. Everything is going good now, so, we’re real thankful.

Good luck with everything that’s to come, thanks so much for being on the show.

Cool. Thank you so much.

Thanks to Suicidal Tendenices’ Mike Muir for the interview. Look for the band on tour in Europe and back in the U.S. over the next few months. Dates can be found here. Find out where you can hear Full Metal Jackie’s weekend show at this location.