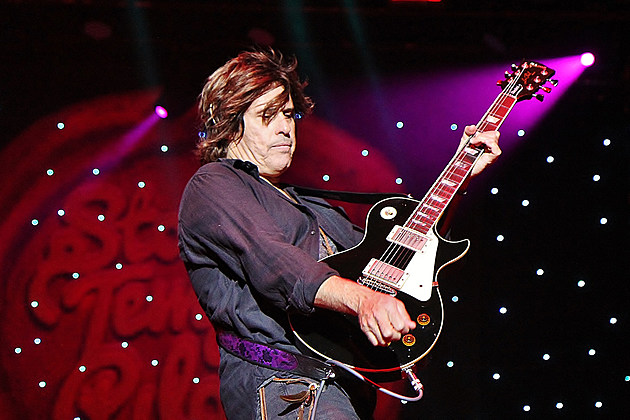 The Stone Temple Pilots have an ambitious undertaking in front of them. Yesterday, (Feb. 5) they launched open auditions to become the new singer for the band, accepting submissions from around the world. The band also detailed their gratitude for Linkin Park‘s Chester Bennington fronting the band after the second departure of Scott Weiland and have now opened up about their search and added more about the passing of the iconic Weiland.

Speaking with Rolling Stone, guitarist Dean DeLeo commented on how busy Bennington was between Linkin Park and his family and the band knew it wasn’t going to work with their ambitions to record and perform more. After playing with a myriad of singers over the last few months, he said, “we felt that we’d be doing ourselves — meaning Robert [DeLeo, bass], Eric [Kretz, drums] and I — a disservice if we didn’t allow all the talent that is out there to become a part of this. So, good or bad, we opened the floodgates.”

“We’ll know when it’s the right person before they’ll even open their mouth, just when they walk into the room,” DeLeo responded when asked what the group is looking for in a frontperson. “We’re looking to be moved by somebody,” he continued, going on, “You know Glen Campbell [singer/songwriter] said to me a long time ago, ‘Dean, you got to live it to write it’ — and you kind of know when that person walks into a room. I want to be hit in that place in my soul where music buries itself. That feeling, man. That’s what we want.”

The trio will be looking at submissions over the next 30 to 60 days, but expect a majority of the submissions to come within the first two weeks. Stone Temple Pilots have uploaded three instrumental version of the classic songs “Interstate Love Song,” “Trippin’ on a Hole In a Paper Heart” and “Vasoline” for potential singers to download and submit up to two audio takes that can be heard by anyone on the site. Other song and video submissions are welcome as well, but will only be heard and seen by the band.

With a burning desire to create new music and forge ahead, DeLeo revealed he and his two bandmates have already made serious headway, stating, “We pretty much have a whole album tracked right now. As far as other material between the three of us, I would say there’s at least a couple more albums there.” When they find the right singer, he added the first thing he wants to do is record and then get back out on the road.

Two months removed from the death of longtime Stone Temple Pilots singer Scott Weiland, DeLeo’s words still hit hard. “You know, it’s sad man. It sucks. I wasn’t in much contact at all with Scott for a few years. But I’m reminded and think about him daily,” he reflected. Clarifying why the situation is so sad, he continued, “And when I say it’s sad, I’m not referring to Robert, Eric or I; we were divorced and most likely never going to work with Scott again. What really, really bums me out is we all have kids. He’s not going to see his daughter go to her first dance or his son go to his prom or help him parallel park. That’s what really, really brings me down.”

Closing his thoughts on Weiland with a personal touch, he shared, “My wife is notorious for leaving the radio on in the car; whenever I get in the car lately, there’s an STP song on the radio. And I’m just, ‘Aww, man.’ I’m reminded of him daily and I’m reminded of him at a time when he was vibrant and so full of life and hope, a time when he was electric with creativity and inspiring.

Weiland passed away on Dec. 3, 2015 due to an overdose stemming from a mix of alcohol, cocaine and ecstasy. He was discovered on the tour bus by his manager before a show in Bloomington, Minn.