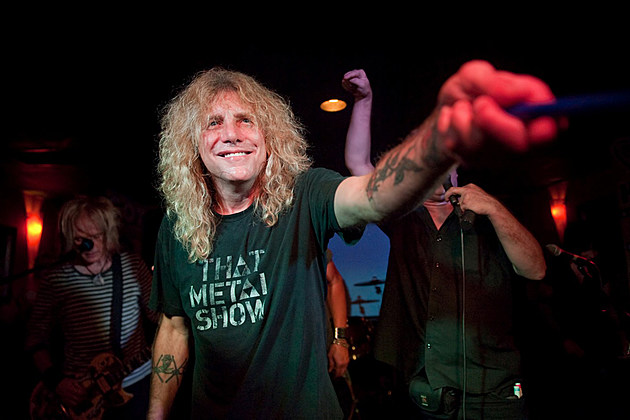 With Slash and Duff McKagan officially back in Guns N’ Roses, more speculation ensues, as fans are holding out for a full blown reunion of the classic Appetite for Destruction lineup that includes former drummer Steven Adler and guitarist Izzy Stradlin. When rumors heated up about the potential lineup change, fans wondered if it would be Adler or his replacement, Matt Sorum, who would return. Now, according to Eddie Trunk, negotiations are under way for Adler to play a role in the monumental reformation.

“My sources have told me current GnR drummer Frank Ferrer will be retained and play the bulk of the show, with perhaps a guest appearance from Steven Adler if a deal can be worked out,” read a post on the radio host’s website. “I would suspect the same with Richard Fortus [guitar] staying, and maybe Izzy popping up,” he added, continuing, “I would also expect Dizzy [Reed] and Chris Pittman to stay. I have heard the Dave Kushner [guitar, Velvet Revolver] rumor but don’t know anything about that and don’t see the connection, but anything is possible. Axl always liked 3 guitars in the later era Guns so who knows?” Trunk also alluded to the idea that Tommy Stinson, who had been playing bass for the most recent Guns N’ Roses incarnation, would likely step aside now that McKagan is back in the fold.

Concerning the drum situation, Trunk also revealed a crucial pice of information, saying “I have also been told consistently by many that Matt Sorum is not involved.” This certainly opens the door for the possibility of Adler’s return, even if it means in a diminished role or only making guest appearances. He was dismissed from Guns N’ Roses in 1990 for the second time after failing to oblige the contract he signed stating he would get his drug abuse under control. When he failed to perform adequately in the studio due to his substance abuse, he was let go and replaced by the former Cult skinsman.