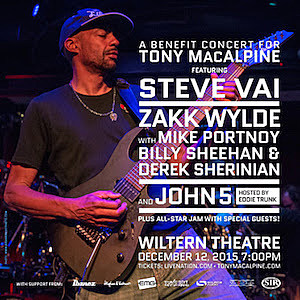 The hard rock and metal community is a pretty close one, especially when it comes out to helping a peer in need. Coming up in December, some of the top rock guitarists — Steve Vai, Zakk Wylde and John 5 — will be staging a benefit show for one of their own — Tony MacAlpine — who was recently diagnosed with colon cancer. Back in August, MacAlpine bowed out of his touring plans to undergo surgery on a tumor in his intestine and he has remained off the road while suffering from colon cancer.

In addition to the trio of guitar greats, The Winery Dogs rhythm section of Mike Portnoy and Billy Sheehan will join keyboard icon Derek Sherinian as the night’s house band. They’ll be joined by special guests for an all-star jam that will finish out the night. That Metal Show co-host Eddie Trunk will serve as the master of ceremonies at the benefit.

“Tony is a dear friend, an absolutely sweet human being and one of the most talented musicians I’ve ever worked with,” says Portnoy, “We are coming together to help raise money and awareness to help him fight his battle and come out on top!”

Adds Steve Vai, “It’s a great privilege to take to the stage with my friends Zakk, John, Mike and Billy in support of our dear friend Tony. Tony has always been blessed with an exceptional talent and more so, he’s an exceptionally cool guy. It’s a great cause and will be a magical evening of guitar extravaganza.”

“Tony has been such an inspiration to me,” says John 5. “He is an incredible musician and an unbelievable talent. Please let’s all come together and beat this!”

Fans can also look for Vai, John 5, Paul Gilbert, Joe Bonamassa, Steve Lukather, Steve Stevens and Joe Satriani all donating guitars that will be auctioned off, while bassist Rudy Sarzo has offered a private lesson and drummer Simon Phillips has donated a signature snare. MacAlpine’s gear manufacturers Ibanez, Hughes & Kettner, EMG, Ernie Ball, Source Audio and Voodoo Lab have all donated equipment that will be raffled at the show as well.

It’s been an especially trying year for MacAlpine, with his wife being diagnosed in breast cancer in June and having some of his gear stolen earlier this year. MacAlpine released his Concrete Gardens album back in May, but his touring was cut short when his health became a concern.

The benefit will take place Dec. 12 at the Wiltern Theater in Los Angeles. Tickets are on sale this Saturday (Nov. 7) at 10AM PT through Live Nation. A concert ticketing page is available with more details at the Wiltern’s website. There will also be a GoFundMe campaign started shortly that will allow fans unable to attend the show a chance to contribute.