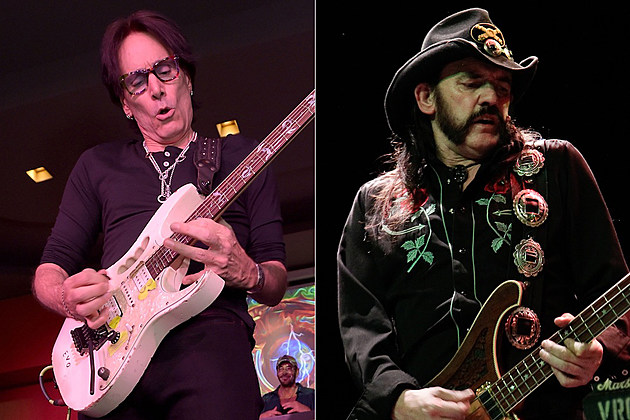 The tributes just keep coming in for Lemmy Kilmister and all of them are worth reading. This one is from guitar great Steve Vai, who got to know Lemmy while guesting on Motorhead‘s Inferno record.

Steve Vai played lead guitar on Inferno‘s opening track, “Terminal Show,” and laid down a guitar solo for “Down on Me.” It didn’t take Vai long to finish his guitar work, but in this tribute, Vai shares how he and Lemmy sat down and talked for about 10 hours after. The friendship lasted right until Lemmy’s death, as the two shared a moment at Lemmy’s 70th birthday party just days before the Motorhead frontman’s death.

His lengthy missive reads as follows and the photo with his Facebook posting can be seen below:

Lemmy was unique in the superlative sense of the word. Everyone loved him. He was the heart of Rock and Roll the way we like it.
I ran into him at the Rainbow Bar and Grill once and said to him, “So when are you going to ask me to play a solo on a Motorhead record”?
He said, “I’ll be at your house Wednesday at noon”.
It only took a few hours to do the solos but the 2 of us just sat and talked for about 10 hours after that.
He consumed a hefty amount of alcohol and speed but never once stuttered, lilted or missed an opportunity for an inspired bit of wit.
He was sharp, alert and extraordinarily present at ALL times. I couldn’t quite understand it.
The record I recorded on was “Inferno” and some days later Lemmy sent me an engraved lighter. How cool, ay?
The stories he told were fascinating and I got to know the remarkable person he was. I discovered why so many of us adore and revere him.
Lemmy marched to the beat of his own drums. His confidence in himself and his music was fierce and he was perhaps the most honest person I knew in this business. Because he was so in touch with himself, he allowed others to be themselves without judging them. He didn’t placate or sugar-coat things but delivered to you the reflection of your own intentions, meaning if you’re an asshole, you better be prepared to be verbally spanked with an inspired array of adjectives delivered with a firm, yet high quality calm. But if your morals were worth the salt, he was incredibly warm, considerate, generous and supportive.
He gave you his quality attention when you were talking with him and that’s the best gift you can give to anyone. We loved him because he inspired in us our own desire to be as independent and dedicated to our work as he was. And he did it with an incredibly solid, rounded, and grounded sense of confidence, warmth and witt.
Not to mention he played his ass off in the tradition of hard, fast, no excuses rock and roll with a look, voice and bass sound unlike anything. He was a totally invested performer who’s authenticity was epic. Even the way his microphone hung from above him will be historically recognizable. He was “the One… ALONE”.
I wrote a song with him and Ozzy called “My Little Man” that appears on Ozzy’s “Ozzmosis” record. Lemmy wrote the lyrics. If you listen to the lyrics of that song you can glean an insight into the deep softness that was comfortably resting under the external persona. The song is deeply touching and when I met his son Paul, I realized how sincere those lyrics are.
I remember when my wife Pia met him and had an opportunity to “kiss the mole” on his cheek.
I was fortunate enough to be invited to perform for him at the Whisky for his 70th birthday party that took place Dec 2015 just a few weeks before he passed. I shared riffs with Bob Kulick and Lemmy’s son Paul, who is really quite a good guitar player. After the show I went to see Lemmy where he sat in the balcony all night. He was shockingly thin and frail but still had that steady awareness of all that was going on in the world around him. I held his shaking hand, told him how nice it was to jam with his son, and then I kissed his hand and said “God bless you my brother, and thank you”.
There are times when you know you will be saying goodbye to someone for the last time in this life, and though there was a sadness, with Lemmy it was a heartfelt salute and a momentary exchange of deep respect and joy in the knowing of each other.
He was the coolest and wherever his attention is right now, he still is.
Lemmy, you were extraordinary and we are grateful.
Steve Vai
(Inscription reads: “From Lemmy to Steve Vai in Gratitude for his fine work on ‘Inferno’ 2004″)

Lemmy was unique in the superlative sense of the word. Everyone loved him. He was the heart of Rock and Roll the way we…