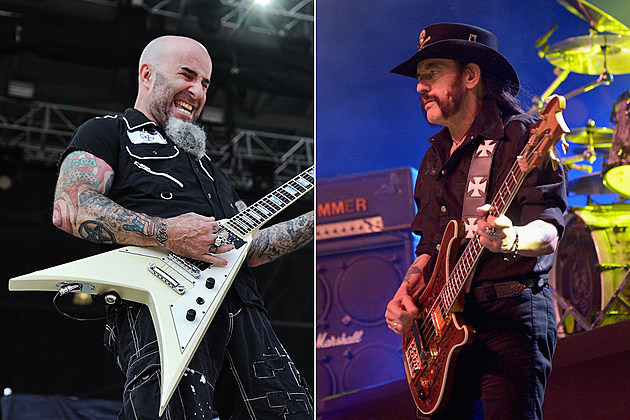 It’s been three days since the passing of Lemmy Kilmister and the tributes are still coming in with memories about the life and career of the Motorhead frontman. A rock star to the fullest extent of the meaning, Lemmy was a predictable character in his simple demeanor, indulging in whatever he wanted whenever he wanted. The band completed their 40th anniversary tour in support of Bad Magic with Anthrax as one of their tourmates. Scott Ian, guitarist for the thrash icons, recently penned some heartfelt words towards the immortal Lemmy.

In a memorial penned at Rolling Stone, Ian reflected on the legend that is Kilmister and shared warm anecdotes about personal moments they got to share. “Motorhead were arguably one of the most important bands in the history of rock music,” he begins. “They were an amazingly hard-working band. They were out there touring every single year. There’s nobody else like that out there. It’s hard to think about a world without Lemmy. It’s been a constant in my life since 1980. It leaves a giant hole that will never be filled.”

Motorhead managed a staggering 22 studio albums, releasing their first in 1977 and averaging more than an album every two years. Naturally, the group toured for each album, demonstrating the work ethic Ian speaks of. He goes on to detail he first learned that an impending press release was going to be made about Lemmy’s terminal cancer, but before the news got out, the icon had already passed. Ian received a call from their mutual manager, Todd Singerman, and recalls, “It was shocking. My heart just sank into my stomach. It’s just something you never think you’re going to hear, no matter what.”

Continuing his thoughts, the Anthrax axeman adds, “Even with Lemmy and his lifestyle — and he was 70 years old — there was an air of invincibility about the guy. He truly was a modern-day pirate.”  Noting the way Lem wrapped up his life, Ian continued, “As much of a bummer as it is, I’m celebrating his life and the fact that he really did go out on top. He finished a tour two weeks ago playing headline shows at venues in Europe that were some of the biggest shows Motorhead had ever done.”

Sharing a personal moment, Ian talked about how Motorhead and Anthrax were playing Sweden Rock Festival and sharing a van with the bass great. They made a stop so Lem could get some Jim Beam, a bottle of coke —most of which the latter was emptied onto the street to make room for the bourbon — and some Hustler magazines. Declining the invitation to partake since it was still 11:30AM, Ian watched Lemmy down the mixture and then top off the Jim Beam in a half hour.

“He stepped out of the van at the Sweden Rock Festival and the guy was straight as an arrow. It didn’t make a dent,” said Ian, adding, “I’ve spent many moments like that with him over the years, but sitting in the van for 90 minutes bullsh–ting with him about whatever — all of a sudden he was just a dude looking at Hustler mag, laughing at the cartoons.

This story represents everything we loved about our seemingly ageless hero as we continue to celebrate his life. As Ian touched upon, Lem was diagnosed with terminal brain and neck cancer and before the word even got out, he had passed away two days following the diagnosis. He had just enjoyed his 70th birthday four days earlier and completed a European Motorhead tour less than a month ago.

The rock community continues to react to Lemmy’s death, including Tony Iommi who called him “a real trooper” and one of the Motorhead’s leader’s close friends Dave Grohl, who got an “Ace of Spades” tattoo on his forearm.