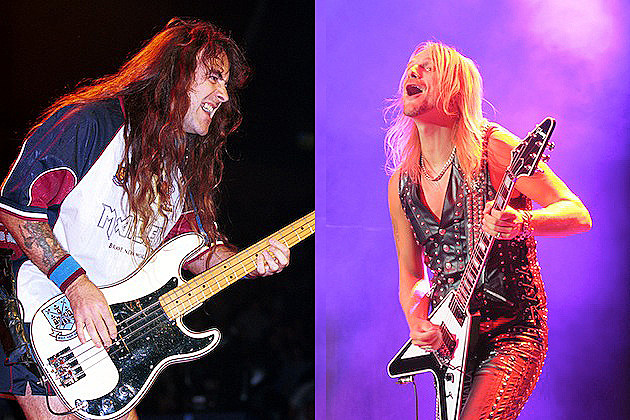 Anyone who has seen Judas Priest with Richie Faulkner on guitar knows that the man truly rips. The 35-year-old is sensational, tearing off dazzling solos with surgical precision and delivering emphatic leads with the stage presence to complete the package. He landed the gig to replace K.K. Downing following the departure of the longtime guitarist of Judas Priest, but he was also the first axeman in mind if another British metal titan needed a new guitarist.

Speaking with gigsandfestivals.com, Faulkner described his relationship with Iron Maiden bassist Steve Harris. Having played in the band Dirty Deeds — who have since shortened their name to just Deeds — Faulkner had been a member of the U.K scene for some time and was on Harris’ radar.

When asked if he was on the metaphorical bench for Iron Maiden, Faulkner responded, “[Laughs] Yeah, you never know! I worked with Steve and Lauren [Harris], and he was one of the first ones that I told when I got the Priest gig. I said I’ve been approached by another band, and he was over the moon when I told him it was Priest.” Receiving high praise from Harris, Faulkner said, “He’s one of these guys who’s really supportive, and [Harris] said; ‘I would have had you in my band. If anything would have happened to any of my guys, you were the guy that was going to do it.’”

Faulkner spent half a decade playing in Steve’s daughter’s namesake band and even toured in support of Iron Maiden in 2008 when Lauren Harris was the opening act on the Somewhere Back in Time tour.

Judas Priest have been in and out of the studio working on their follow-up to Redeemer of Souls which featured new hits like the title track and “Halls of Valhalla.”