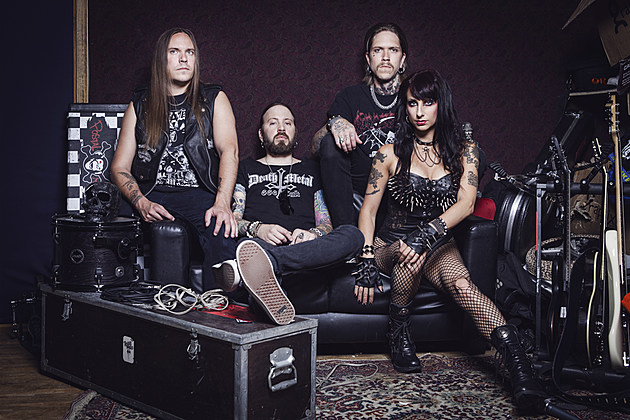 Sister Sin have decided to call it a career. The old school metal rockers from Gothenburg, Sweden revealed their split in a posting via their various websites and social media on Saturday (Nov. 7), but did offer an opening for a return.

Momentum plays a big role in lifespan of many bands and according to the group’s posting, they found that after recently taking a rather small break from the road and recording, the desire amongst the band members to resume when the time came simply wasn’t all there. Check out their posting on the matter below:

We know this may come as a surprise to many of you; honestly, it kinda took us by surprise too.
What was supposed to be a short eight weeks break, suddenly & unfortunately, turned in to the demise of the band.
.
-We have been touring and recording in a relentless schedule since 2008 and I guess we burned the candle in both ends and hit a wall. When we finally had the opportunity to step back and get some perspective, the motivation for some members in the band just wasn’t there any more…

Would like to take this opportunity and thank our beloved road crew, Victory Rec, Danger Music, Artery Foundation, TKO & all other great people and companies we worked with these past seven years as a professional touring act.

Most of all we would like to thank YOU; Our dedicated, devoted, loving and caring fans around the globe! We´ve truly been blessed to be able to travel the world and meet so very many of you Sinners. -Together we managed to sell tens of thousands of albums and achieve what most young bands only can dream of in this day and age.
You truly are the sole reason we pushed on for as long as we did and we will cherish the memories forever and never forget your unconditional love!

It is our hope that the flame will burn once again and hopefully resurrect this Swedish bastard sometime in the future. Time will tell…

After posting the above message on their Facebook page, the band elaborated a little further in the comments section of the post. The group, overwhelmed by the outpouring of responses, added the following commentary:

Wow! Its amazing but also heartbreaking to see what an impact the band has made. We will try to answer as many emails and questions possible during the course of the next couple days. To clarify what can’t be clarified: there isn’t a one good, simple explanation why this happened. We are four people trying to make a marriage work. Sometimes it just doesn’t work. This decision wasn’t easy at all. Thank you all again for the love & heartfelt comments! Music & Metal unites!

Sister Sin formed in 2002 and by 2003 they released their first studio album, Dance of the Wicked. By the time they finished their career, the group had yielded five studio albums, with Switchblade Serenades, True Sound of the Underground, Now and Forever and Black Lotus rounding out the catalog. There was also an EP titled Smash the Silence in 2007 and a reissue of their Dance of the Wicked debut in 2013.