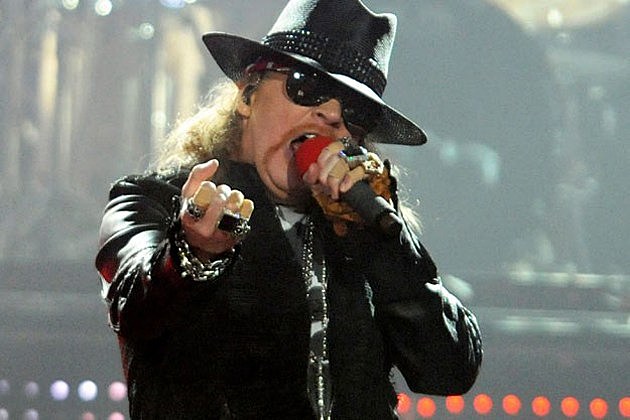 After months of rumors and speculation, it’s now safe to say something big is happening with Guns N’ Roses. The newest piece of reunion news reports that Axl Rose will appear on Jimmy Kimmel Live! next week to talk about GN’R’s upcoming plans.

Back in 2012, Axl Rose visited Jimmy Kimmel Live! for his first live interview in two decades. Music journalist Mitch Lafon began dropping hints about a Guns N’ Roses appearance on Kimmel for Jan. 6, claiming you’d have to be crazy not to mark the date on your calendar. The date has not been officially confirmed, but it’s worth noting the lineup for Coachella, which Guns N’ Roses have been reported to headline in 2016, will be unveiled Jan. 5.

Axl Rose’s rumored appearance on Kimmel has now been confirmed by Rolling Stone. “Multiple sources confirmed Rose’s Kimmel appearance to Rolling Stone, but declined to reveal the specific nature of his announcement or taping date,” the publication posts.

A mysterious GN’R teaser played in many theaters showing Star Wars: The Force Awakens, bringing excitement for a reunion to its zenith. Recent Coachella rumors have tied Slash to Guns N’ Roses’ potential comeback, though Duff McKagan is widely thought to be a part of it as well.

Fire up your DVRs to record Jimmy Kimmel Live! on Jan. 6 just in case and keep your eyes open for an official announcement from Kimmel hopefully coming soon.