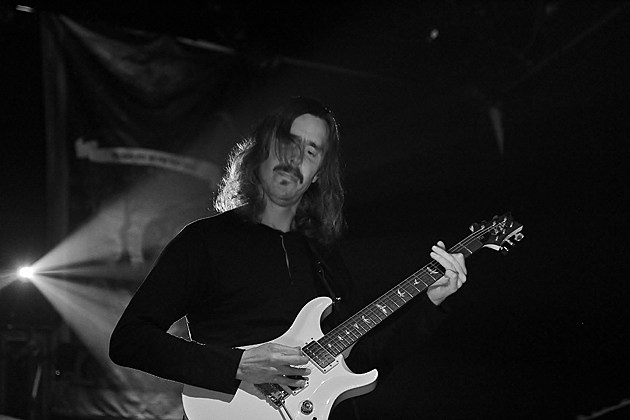 Opeth mastermind Mikael Akerfeldt has joined in offering his thoughts on the recent passing of two rock and cultural icons; Motorhead‘s Lemmy Kilmister and David Bowie. Never short on dry, quick-witted anecdotes, the progressive master penned a charming statement reflecting on the loss of these two greats filled with personal encounters and musical influences.

Opening the statement, Akerfeldt details his experience when learning of Lemmy’s passing, citing the familiar pain of losing someone close. He revealed he didn’t know the iconic bassist and rock ‘n’ roll rebel, but had met him a couple times. Recalling his first encounter, he said, “I remember calling him ‘Ian,’ as I’d had a few beers and wanted to come off as someone that possessed a little bit of a deeper knowledge of him than the aggressive selfie-hunters.” The plan backfired and he continued, “Obviously, I failed miserably, and I don’t think he liked me very much, and he didn’t want to be called ‘Ian’ at all. He’s ‘Lemmy’ and that’s that. So on the subsequent ‘meetings,’ I resorted to a respectful nod and perhaps a feeble-sounding ‘Hi!’”

Mentioning Opeth and Motorhead have shared bills before, he added that he saw Motorhead on what wound up to be their final tour. Commenting on that special night, Akerfeldt said, “There’s a special feeling in the air. As usual, it was a celebration of heavy music as well as that of Motorhead, Saxon and Girlschool who were on tour together. But I also think a lot of people at the event knew that it’s possibly the last time they’d be able to see Motorhead. At least on a headlining tour.” The show felt different than normal according to Akerfeldt, who continued, “It was quite magical, I have to say. There’s a profound feeling of respect in the air throughout the evening. I can’t recall any previous show I’ve ever been to that had that same vibe, or even similar.”

Offering his final words on Lemmy, the Opeth frontman concluded, “He was someone really special. One of the last ‘big’ personalities in the scene. We will cherish the memory of Lemmy and his music forever.”

“And… Today I was reached by the news of David Bowie’s passing,” Akerfeldt said, shifting gears to the latest loss in the rock world. “He was such an important artist for Opeth. Many of you might find that hard to believe, but that’s how it is. It’s with terrible sadness we have to accept that he’s gone. He made some absolutely incredible music and I still frequent his discography on a regular basis.”

Sharing a story from his childhood, Akerfeldt discussed how he wanted a metal back patch for his jacket for his birthday. A huge Bowie fan already, he received a patch for his Let’s Dance record, which never wound up on the jacket because he wanted it to look metal.

Returning to the influence Bowie’s music had on Opeth, he went on, “Bowie was a pioneer, as far as I’m concerned. He never did was what expected of him, and he often changed his musical direction to almost the complete opposite to what he’d done previously.” Opeth are a band that casts themselves in the same light as Akerfeldt has come under fire from fans for abandoning the band’s death metal leanings in recent years in favor of progressive rock stylings.

“That’s something I admire. Artists who seem unable to play it safe and just deliver what’s expected of them. Artists who explore the world of music, and push their own boundaries as individual musicians, the Opeth mainman continued. “There’s quite a few of them about still, but in Bowie we certainly lost one of the very best. And I still love ‘Let’s Dance’, even if I certainly can’t dance myself.”

Two days after being diagnosed with terminal neck and brain cancer, Lemmy passed away on Dec. 28 at 70 years old. Bowie also lost his cancer battle after 18 months and was reported to have suffered six heart attacks in his final years. The rock legend released his 25th studio album, Blackstar, on Jan. 8, which was also his 69th birthday. He passed away two days later.