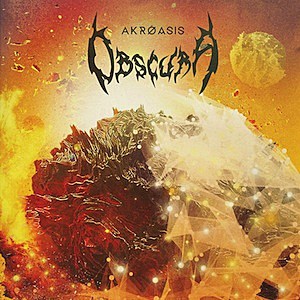 German death metal masters Obscura are coming back with another new album! Obscura’s fourth studio album will be called Akróasis and it’s set for a Feb. 5 release via Relapse Records.

The word Akróasis is Greek for “hearing” or “listening,” both of which you can do right now in the album trailer posted by the band. Treat your ears to that trailer below.

Akróasis will be Obscura’s first effort since three of the four members of the band departed. Along with longtime frontman Steffen Kummerer, bass duties are handled by Fallacy / Alkaloid’s Linus Klausenitzer, while guitarist Rafael Trujillo and Unknown Dimension drummer Sebastian Lanser fill out the sonic space.

“With Akróasis, we produced our grand opus featuring eight songs of fluent arrangements, odd time signatures never heard before in metal, and the most high end production in the history of the band. Without question Akróasis is the heaviest, most complex record we have made to date. We cannot wait to perform live again and bring this excellent music to stages around the globe,” says Kummerer.

You can grab both physical and digital pre-orders of the upcoming album right now. Check out the Akróasis track listing below.