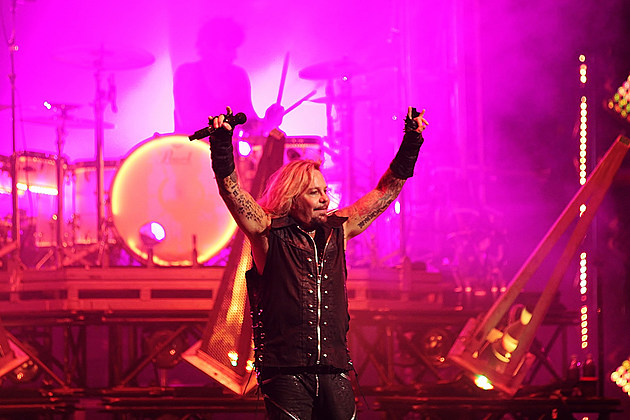 With just 10 days left in 2015, it also means there’s just 10 days left of Motley Crue as a touring band. ‘The world’s most notorious rock band’ is hanging up their touring shoes for good following their finalshow on Dec. 31, billed as Crue Year’s Eve. Farewell tours have become a joke rather than formality, as bands have embarked on multiple farewell tours in the past. Throughout the year, Crue have remained steadfast that this is indeed their last tour, and Vince Neil has offered another reason why.

“I mean, KISS had five farewell tours, and four reunion tours. That’s exactly what we don’t want do to,” Neil stated when speaking to the San Diego Union Tribune. Prefacing this statement was the singer’s response to bands like KISS and the Who having completed multiple farewell tours, saying, “Other bands don’t really give a s–t. That’s their philosophy: ‘This tour will never end’; or ‘We’ll do reunion tour.’ That’s not what we’re about. That’s why we’re going out on our terms.”

Expanding on the notion, the singer went on, “We wanted to go out on top, with people saying: ‘Yeah, man, I saw the last concert. It was awesome!’ We don’t want to be that band, where it’s (billed as) Motley Crue, and it’s maybe one (original member’s) brother left in the band, and they’re playing clubs. … If we let that happen, we wouldn’t be thought of or remembered like we wanted to be.”

Motley Crue signed a cessation of touring agreement that legally forbids the band to hit the road again under the moniker. Stating that the band will not incur any penalty if they break the agreement, Neil added, “[The contract] wasn’t for us; it’s really for everybody else, to show how serious we are about not trying to find a loophole [to reunite]. Someone might ask: ‘Oh, what if a sheik gave you tens of millions to get back together?’ No. It’s not about that… We have (a few) more shows, and that’s it.”

Though no penalty exists if Neil and his bandmates break their agreement in regards to touring, he has other legal woes to contend with. Last week, he was accused of defrauding investors of his now defunct arena football team, the Las Vegas Outlaws. The investor, Sohrob Farudi is suing the singer and two others for fraud, conversion, unjust enrichment, conspiracy and defamation.