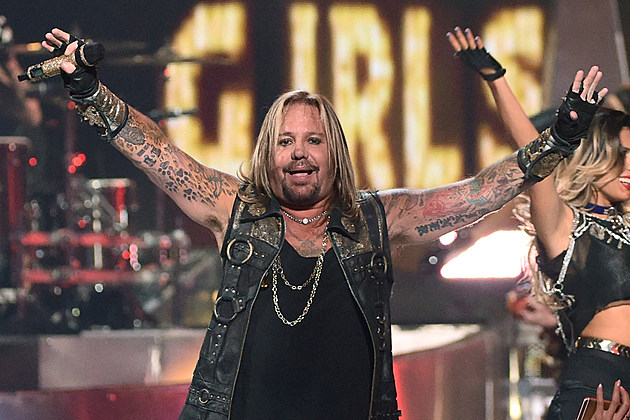 Have you caught Motley Crue on “The Final Tour”? We hope so because it may be one of the last chances that rock fans have to get to see a mix of great songs with an undeniable visual entertainment element included all within one show, at least according to Vince Neil.

In a new interview with Maxim, Neil bemoans the fact that there are fewer and fewer bands willing to bring the major production value to their performances. He explains, “When we started getting bigger and were headlining arenas and all the other bands in the ’80s were coming out and ‘arena rock’ was kinda being born, we really took pride in putting shows together. We put a lot into the entertainment value of fans coming out to watch a show. And that was really only a handful of bands, like us, who went out of their way to give fans a great show. And there’s only a handful left.”

When you think about it, how many acts deliver huge amounts of pyro, a major light show and bring you something as elaborate as Tommy Lee‘s drum rollercoaster to the stage? Neil goes on to add, “It’s like us, Ozzy [Osbourne], Alice Cooper and KISS. That’s it. When we’re all gone, I don’t see anyone else carrying the torch of wanting to put together a great show with pyro and lights and fire, along with the songs. It’s just kinda sad that that’s all kinda disappeared. Hopefully there’s someone out there right now in their garage rehearsing, lighting themselves on fire.”

Now in their final month of touring, Motley Crue will play Saskatoon tonight (Dec. 10), with shows in Edmonton and Calgary on Saturday (Dec. 12) and Sunday (Dec. 13). Their remaining schedule includes West Coast shows in Portland, Fresno, Phoenix, San Diego, Anaheim and Las Vegas before their three final dates at Los Angeles’ Staples Center Dec. 28, 30 and 31. If you can get to a show and make a lasting memory, now is the time. For dates and ticketing info, click here.

See the Yearbook Photos of Vince Neil and Other Rockers