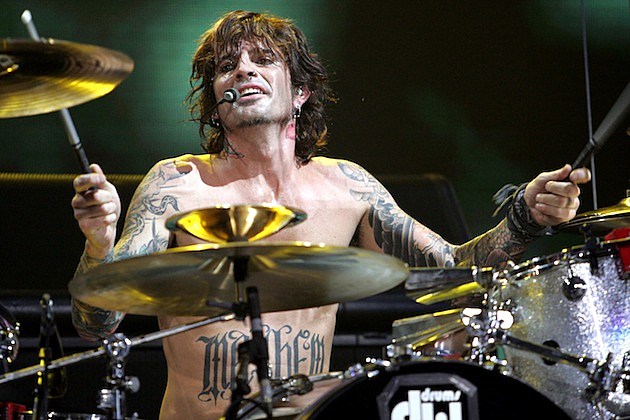 As Motley Crue closed out another North American leg of their farewell tour in October, drummer Tommy Lee had to watch the rest of his band perform without him for the last five shows. Battling tendonitis, the drummer remained hopeful each night that he would be able to return to the stage. Alice Cooper‘s drummer Glen Sobel filled in wonderfully on short notice, ensuring the show would go on. Following a short break between legs of the tour, Lee is back manning the kit.

Speaking with Abu Dhabi, United Arab Emirates’ The National, Lee explained his wrist injury and what he was doing to try to return behind the kit as fast as possible. He confirmed, “I’m back to 100 percent.” Talking about his injury, he said, “I bruised a bone in my wrist, but after a serious double dose of cortisone that helped with the inflammation, and with the help of this little wrist machine to exercise it, I’m back to normal.”

Adding that injuries are just part of the territory that comes with being a drummer, he continued, “I’m always getting injuries like bruised and bloody knuckles from catching a cymbal or the edge of a drum. Drumming’s pretty physical. We sit at the back of the stage getting beat up like a workhorse.”

Getting back to the most recent injury, Lee went on, “Anytime you do something repetitive over a sustained period — and this tour’s already been a year and a half — your body just says, ‘I’m hurt. I can’t do this.’ But I’m all good now. They got me back into shape and I’ll be slugging the drums like a maniac in Abu Dhabi.”

Motley Crue will see the Final Tour come to a close with three nights in Los Angeles, the last being on New Year’s Eve. The band signed a Cessation of Touring Agreement, legally binding them to a contract that forbids them from touring again in an effort to prove this is definitely the band’s last run.