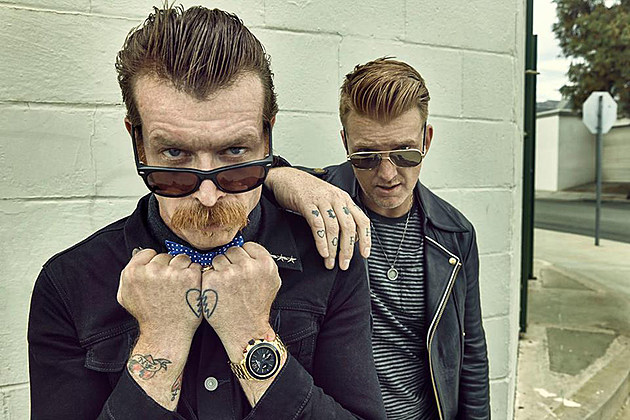 Bands go through a lot while on tour, but Eagles of Death Metal have just gone through something that we hope no other act ever has to face. During their performance Friday (Nov. 13) at the Bataclan in Paris, a terrorist group invaded the venue, killing 89 people and injuring many more. The band’s members managed to make it to safety, but some members of their crew and support staff were not as fortunate. The band has now issued a statement on the events of last Friday.

In the statement, we learn that more than just their merch guy Nick Alexander perished in the incident as three people from their record company were also among the casualties. As expected, the band has called off their touring until further notice. Read their statement below:

While the band is now home safe, we are horrified and still trying to come to terms with what happened in France. Our thoughts and hearts are first and foremost with our brother Nick Alexander, our record company comrades Thomas Ayad, Marie Mosser, and Manu Perez, and all the friends and fans whose lives were taken in Paris, as well as their friends, families, and loved ones.

Although bonded in grief with the victims, the fans, the families, the citizens of Paris, and all those affected by terrorism, we are proud to stand together, with our new family, now united by a common goal of love and compassion.

We would like to thank the French police, the FBI, the U.S. and French State Departments, and especially all those at ground zero with us who helped each other as best they could during this unimaginable ordeal, proving once again that love overshadows evil.

All EODM shows are on hold until further notice.

In response to the acts of terrorism within Paris, French fighter jets bombed a series of ISIS sites in Raqqa, Syria. Police also raided an apartment where the suspected ringleader of the attacks was believed to be.

Our deepest condolences go out to Eagles of Death Metal and their extended musical family as they deal with the aftermath of this horrific attack.

See What the Rock Community Said About the Paris Terrorist Attacks